In our lavish praise of all things Chihuahuan, especially the race of the toy yapping dog, we’ve failed to mention the big guy: Pancho Villa.

He was born in Chihuahua and died in a hail of bullets in nearby Parral in a really clunky-looking car. In between, the man lived mucho grande large. Even bigger than Chi-man, Anthony Quinn.

Is this cool? Yes it is.

Revolutionary war general and national hero, Villa was always the man. He ran circles around U.S Commander Pershing, robbed trains, rode horses up staircases, faced down a firing squad and learned to read in prison.

If he was a director Sportif of a Pro-Tour cycling team, those men would ride hard. Harder than El Pollo Rasmussen’s Team Tecos, harder than Oscar Sevilla’s Rock Racing outfit. More like Postal and Discovery in the days of Lance when they ruled the Tour de France with an iron hand.

Is this cool? Yes, again.

So it should come as no surprise to anyone in the pedaling universe that Pancho Villa would have his own cycling jersey. Hell, the man should have three jerseys named after him — and if fact he does.

Riders have a choice between the Mexican Guerrillero Bike Jersey, the wacky yet cool Pancho Villa Guns jersey or, if that just doesn’t match your old Kelme shorts, there’s the Pancho Villa Tequila wear. Some truly bad-ass, fast-wicking gear. Wear one of those jerseys with two crossed ammo belts and nobody is gonna mess with you and your Colnago.

Need we say more about Pancho Villa? Yes, he might be buried in Chihuahua or he might not be — historians are undecided. Thus, he is bigger than life and also bigger than death. 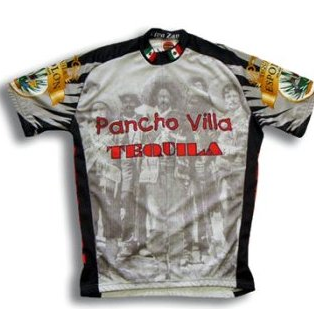 Is this cool? Three times, yes.

Our favorite story? A pawn shop in El Paso, Texas claims to have his preserved trigger finger. Is that just plain loco? The mind reels.

And keep this in mind as a final Pancho Villa thought, No Pancho, maybe no bucket of cheap margaritas on Cinco De Mayo. Oscar Sevilla, you’re about to win your first Vuelta Chihuahua. Somewhere Pancho is smiling.