That's MR. Chihuahua, to you, pal.

Aiii CHihuahua. In our continuing obsession with the funniest race in Pro-Tour-dom, we realize we’ve forgotten a word or two hundred about the most famous son of Chihuahua, the great actor Anthony Quinn, winner of two academy awards for Viva Zapata and Lust For Life. Sadly, he did not star in Breaking Away, the seminal cycling flick with Dennis Quaid.

Any cyclist who has adopted the Vuelta Cyclista Chichuahua should be Quinn-savvy. Suppose you’re at the race some year, standing at a corner taco stand and a local asks you about Quinn’s role in Fellini’s La Strada. What are you going to do? Mumble some nonsense like “Quinn, uhh, wasn’t he a support rider for Eddie Merckx?” You could get knifed for that kind of mistake. 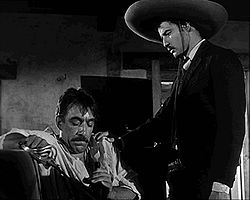 Anthony Quinn was born in poverty in a hut in Chihuahua, the son of a Mexican mother and an English-speaking Irish-Mexican father. Dad fought for Pancho Villa before saying vamos for California and Texas.

Some cycling specific facts about Quinn. His autobiography, One Man Tango, uses the metaphor of a bicycle trip over the hills of Rome. As he pedals, he reflects on his entire life.

One of Quinn’s twelve kids, (the man had four wives and numerous flings) actor Francesco Quinn directed a documentary called Vita in Bicicletta, set in Los Angeles. He was also a contestant on Ty Murray’s Celebrity Bull Riding Challenge and a fascinating man in his own right — but that’s a different Mexico tie-in.

Quinn used to ride his bike (the motorcycle kind) with his sons in LA back when Coldwater and Mulholland drive were just dirt roads. Big, bad Steve McQueen was doing the same thing. The man had two wheels DOWN!

So there, you’ve got Anthony Quinn, Mr. Chihuahua, all memorized. And about the Fellini question– the answer there is to nod with tremendous gravity, the drop of a casual reference to Italian Neo-realism and then tossing the question back in their court — what is the common thread in La Strada and The Bicycle Thief? They, naturally, are dumbstruck. You smile, “it is like the smile of a chihuahua,” you say. Genius and free drinks are yours, amigo.