As a tough classics rider, George Hincapie has ridden through more lashing rain and wind than almost anyone. From Roubaix to Flanders to the Tour de France, that’s thousands and thousands of kilometers in miserable, cold, wet conditions.

So perhaps it’s no surprise that his Hincapie Sportswear has given us the best rain and wind shell ever created. This is a piece of cycling gear that isn’t just an evolution in protection but raises the bar and changes the entire experience of riding in the rain. We know that’s a bold statement and we’ll do our best to back it up. 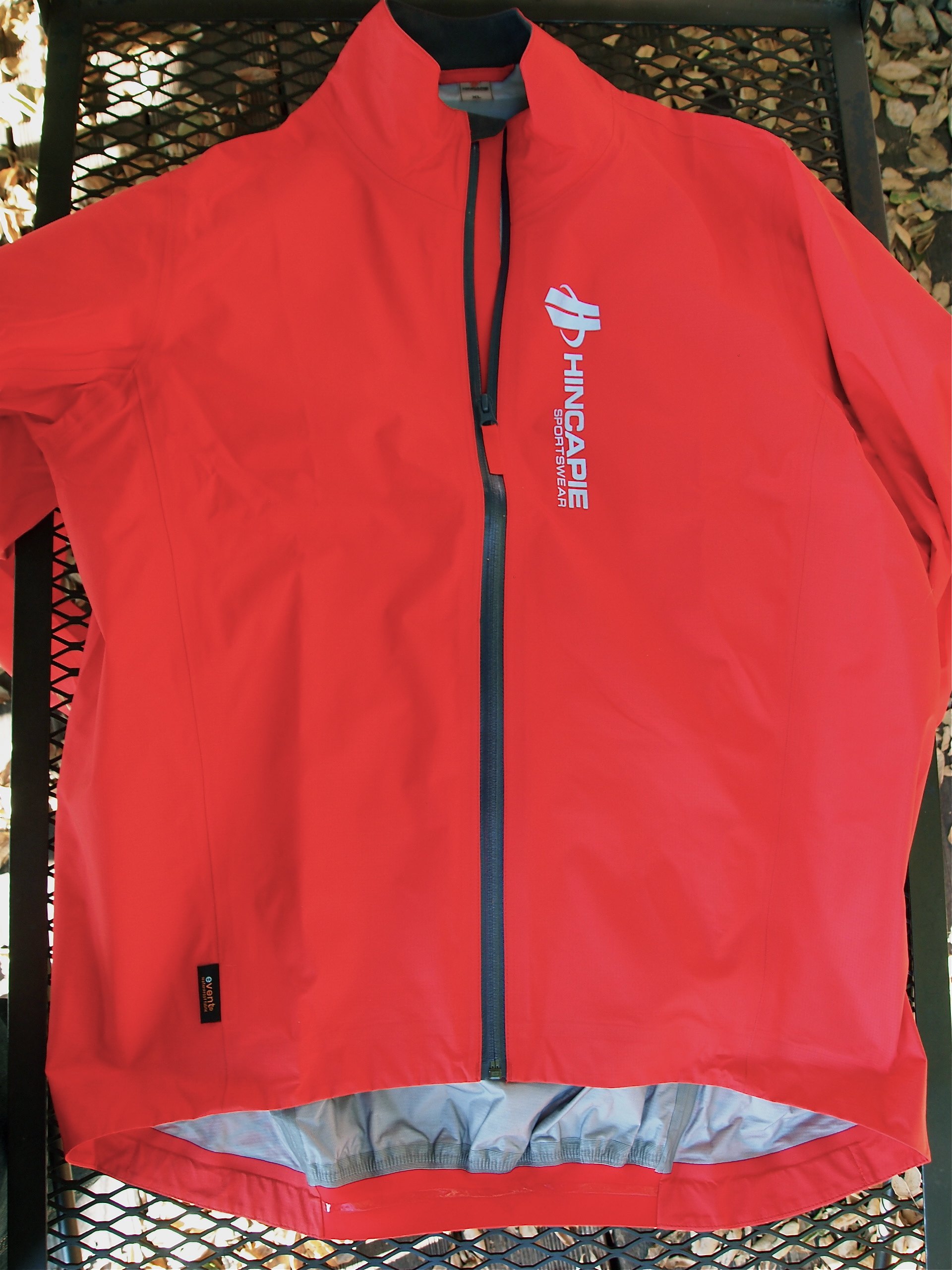 The Hincapie Signature eVent shell employes a lightweight three layer Barrier Ripstop but the true innovation is the eVent technology. We stumbled on eVent last season when researching Gortex fabrics and the newer alternatives.

A quick trip to the eVent fabric site is informative but the gist — and why Hincapie designers were so excited — is that it’s a direct vent approach, not the slow, less effective two step process of pushing sweat to the outside while still attempting to keep rain from getting in.

Our test rides with the Hincapie eVent shell were a mixture of shock and surprise. As we all know, it’s a nearly impossible task to stay dry and warm in the rain while you’re pedaling hard enough to work up a sweat. Yet the Hincapie rain shell managed to do just that. Rain gear usually gets slick with cold sweat on the inside of the fabric because it just can’t transfer moisture quickly enough. When we felt the inside of the Hincapie, it was barely damp to the touch and when you unzip, it dries rapidly. 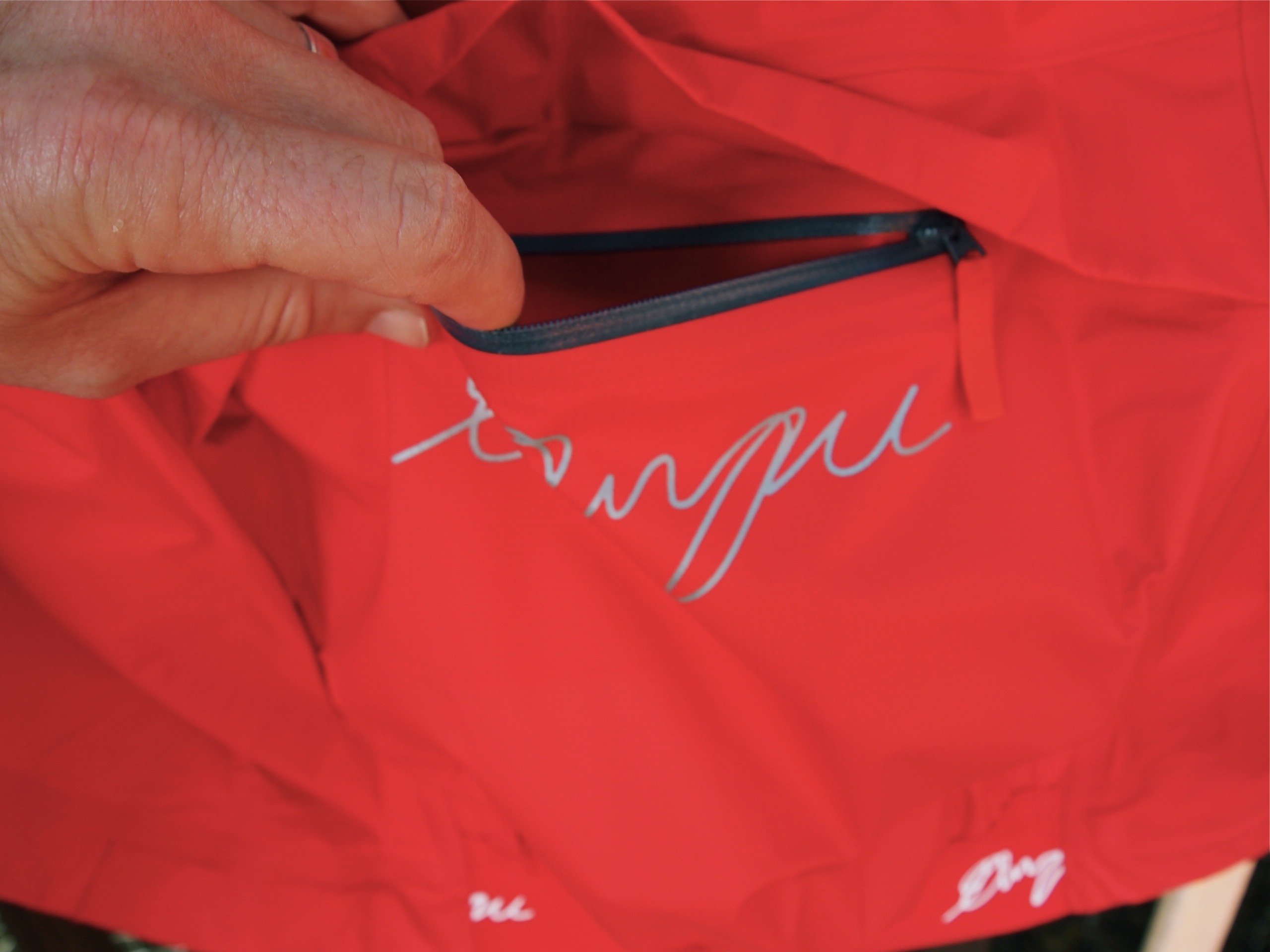 In truth, we hate riding in the rain. On the far side of 50 and working at a home office, we have the flexibility to ride whenever the Winter weather clears. If it doesn’t, we’d rather do an hour on the trainer in the garage. The whole Belgian hardman-in-the-rain vibe is fun for about 15 minutes and then we’re soaked and demoralized. Now, we have something we never had before: a solution.

At $300, the Hincapie eVent shell is high priced but we’d argue that it’s not just a better rain jacket, it alters the balance of power between man and meteorology. Bad weather no longer dictates your ride.

Everything about the rain shell is top notch and it really feels high quality. All seams have wide taping and appear carefully sealed. The waterproof coating applied to the zipper line is flawless. You’re locked down and ready for a deluge. 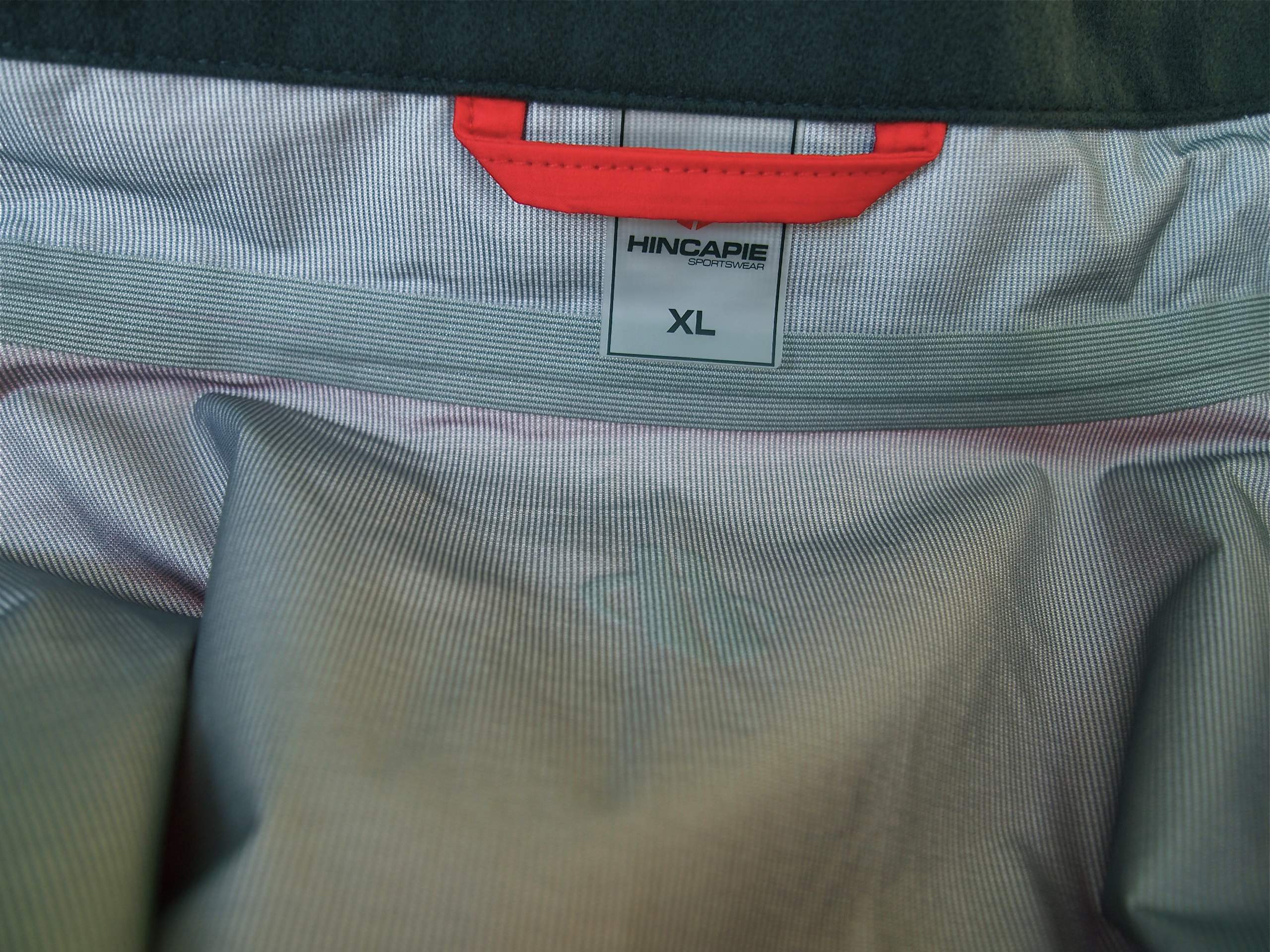 With such serious rain protection, you’re assume the fabric would be on the heavy side, stiff and relatively inflexible. Nope and nope. It hangs well and moves well when you’re in motion. That’s part of what impresses: this is exceptional rain protection yet you don’t pay a penalty in bulk weight.

The fit is tailored and sleek and in particular we liked the high collar, the warming band of fabric on the back of the neck and the tapered sleeves.  We got a perfect seal around our neck –and on ice cold descents that is a major bonus. This jacket vents so well there’s no need for under-arm zippers to open up the operation. That’s also another reason the cut of the shell is so trim.

There is one midsize back pocket with a generous protective rain flap. Our one small criticism would be that it’s not super easy to access when riding because the actual zipper opening is on the small side. You’re paying top dollar so you do get George’s signature in white cursive on the back — which actually styles things up on the red fabric. 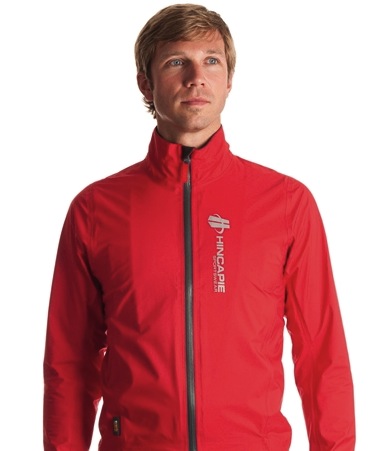 It’s standard marketing proceedure to throw out superlatives for even mediocre products — words like unsurpassed and revolutionary. That kind of hype does a disservice to the few superior things that actually merit the praise. The Hincapie vest is one of those rare achievements.

It’s our theory that Hincapie was ready to retire two years ago but when he tested out his new eVent shell, he realized he could ride the Northern classics in horrendous conditions for another season or two.

George is much beloved by fans because he’s a down to earth guy who always makes extra time for fans. We suspect he’s going to be even more popular once news of his Signature 3L eVent rain jacket gets out.