Big dog in the Chihuahua.

Javier Benitez (Contentpolis) won the first sprint etapa, in the 118 kilometer stage from Chihauhua to Cuauthemoc.

Cartoon character Speedy Gonzales, riding for the Los LooneyTunes squad was nipped at the line by the Italian fast man and settled for second place. Ah, just kidding, amigos. Numero dos was actually Cristian Benatti (ISD) with Michael Kreder (Radobank) on his wheel. 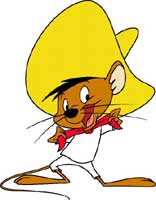 The “chicken” or “el pollo” as we call him in Chihauhua-land, retains the lead in the overall classification, keeping his lime jersey that’s the exact same color as a bottle of Jarritos lime-limon.

As usual, the excitment never stops at the Chihuahua, the race of the yappy toy dog. Stunned riders learned that the infamous Frito Bandito and his gang of marauders had ransacked the feed zone. There were no energy bars or Gatorade left when the wearly riders rolled past. 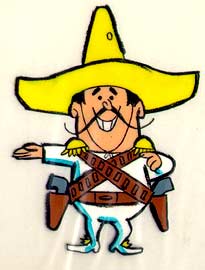 According to reports, the bandito sang a modified version of his classic jingle: “Aye, yii, yii, yiiii, I am dee Frito Bandito. I like Clif Bars. I love them, I do. I want Clif Bars. I’ll take them, from you.”

The Bizarre Dutch link. We said the Chihauhau just gets stranger and stranger. Latest oddity: When we read etapa one ran through Mennonite country, we assumed some translator had just completely blown a mental fuse. Mennonites in Mexico?

But no, a group of Mennonites from a sect started by Dutchman Menno Simons  left Canada in the twenties and set up shop in Cuauhtémoc. No wonder Dane Michael Rasmussen feels so at home. This means you can get a chicken enchilada with sauerkraut. The mind reels. But we have no time for that because etapa 2 is on tap.