First, ponder this query: why doesn’t Lance Armstrong have his own signature umbrella?

Before we answer that brain tickler, let’s examine the powerful Radio Shack line-up for Paris-Nice. There’s an an in-form and crash-free Chris Horner just coming off a second place in the Tour of Sardinia.

There’s Levi Leipheimer, three time winner of the Tour of California and bronze medalist in the time trial at the Beijing Olympic games.

There’s 24 year old rising star Tiago Machado of Portugal who just took third overall in the Tour of the Algarve. (This is the guy Johan Bruyneel can’t stop talking about.)

There’s Sébastien Rosseler, who gave the Shack their first win of the season in stage four at Algarve. 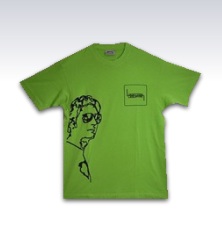 There’s Yaroslav Popovych because he’s one of Bruyneel’s best mountain men and always around for the big events.

There’s Gert Steegmans, their best one day classics rider (even though his brain is probably still scrambled from his recent concussion.)

And there’s the always faithful Jani Brajkovic who Johan hijacked from Astana.

And finally, there’s …. Geoffroy Lequatre. Who the runny brie is that? He’s the man with his own line of signature umbrellas. In fact, we’re confident in saying he’s the only rider in the pro ranks that sells branded parapluies — that’s umbrella for you non-Frenchies.

Now, Jeff TheFour as we like to translate him did bag a 2nd place in Stage five of the 2008 Circuit Cycliste Sarthe. But what sets him apart is his boutique. (Watch-out George Hincapie Sportswear.)

At his personal website he offers fans the chance to buy LeQuatre t-shirts, polo shirts, a travel sack, baseball caps and umbrellas in three different colors. Lance Armstrong, for all his wealth, power, endorsements and influence does not have his own signature umbrella. 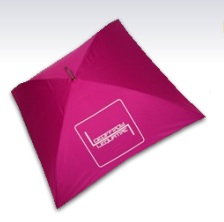 What — he can’t get Oakley or Nike or Trek to work him up a nice anti-rain device? Maybe some LA branded rain galoshes? Seems like a missed marketing opportunity for the normally well-oiled Armstrong machine.

So Twisted Spoke is guessing that Johan threw LeQuatre on the team for two reasons. First, it’s a French race and Geoffroy is undeniably French. And two, what if it rains? Well, with LeQuatre and his rain gear, Radio Shack is always ready for all eventualities.

Wonder if El Pistelero has a signature umbrella — maybe brother Fran better get working on that one.