The brash and heavily funded Team Sky got some humility lessons today in a hot and hot-headed day of racing in the Jabal Akhdar mountains.

Stage four of the Tour of Oman was loaded with surprises as neo-pro Leigh Howard (HTC-Columbia) won the stage while Edvald Boasson Hagen (Team Sky) paid dearly for a nature stop.

Arguments began after Sky handed the daily break almost seven minutes and then became furious when other teams refused to help close the gap. Informal rider poll? That’s your responsibility Sky, you’ve got Boasson Hagan in the red jersey so get to work. 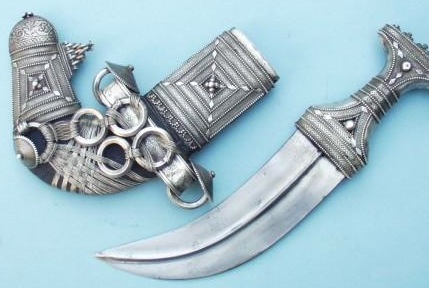 The daggers are out.

There was no time to bring in a third party mediator or settle things with Omani khanjar daggers. Instead, Sky mashed the pedals and blasted through the feed zone, then threw everyone in the gutter with a half road echelon in the wind. Cervelo and HTC-Columbia were not amused.

It’s tribal justice in the Middle East, an eye for an eye, a flick for a flick. When Boasson Hagen stopped for a nature break 55 kilometers from the finish, Cervelo retaliated by going full gas, splitting the peloton and leaving the stunned Norwegian behind.

Cervelo TestTeam threw five riders in the split along with six from HTC-Columbia. Tyler Farrar, Boonen, Bennati, Stuart O’Grady, Fabian Cancellara (Saxo Bank) and Marcus Burghardt (BMC) also made the now famous nature-break breakaway. Much has been said about Team Sky’s aggressive business approach to bike racing. That brash attitude, mixed with jealousy about their deep pockets, didn’t win any friends. This was a payback day in the desert. 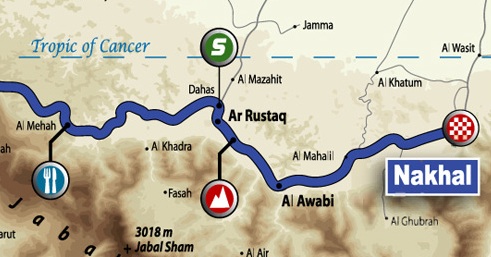 The scene of the crime.

Team Sky eventually gave up the chase and Boasson Hagen brought home the main group 1:05 behind. His nature break dropped him 33 places down the standings. In the slight uphill finish in Nakhal, young Australian Leigh Howard (HTC-Columbia) topped Daniele Bennati (Liquigas-Doimo) and Tom Boonen (Quick Step) to notch his first big win. And so the battle of the bladder ended with Bennati taking the red jersey with two stages remaining.

However, the punches were still flying hours after the race. “That’s bike racing, the team rode well and solid, Edvald went to have a natural break, someone reacted to that, and the rest is history,” said Sky head coach Shane Sutton.

“Tension’s running a bit high after the stage, but it’s a long season and you can’t get too engrossed in one thing. We had the jersey for a few days, won a stage and the boys have done a fantastic job, we will be ready come the big classics. Now it’s time to regroup and rethink – and hit back tomorrow.” The hit back threat is the part to remember. Cervelo, bladder control will be essential!

British rider and veteran Roger Hammond (Cervelo) made it clear what he thought of British Team Sky’s tactics. “They brought it upon themselves. They can have it one way or the other. Either everyone plays the same game or they play unfairly and then they get unfairly treated,” he said. 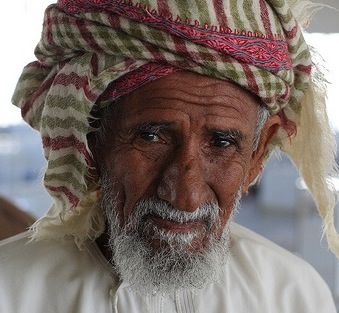 Daniele Bennati, who benefited from the Sky-Cervelo slugfest, took the middle ground in explaining the days events. “It was an aggressive stage. Sky had the jersey and it was their responsibility to chase the break they had let go. Racing is racing but perhaps it wasn’t fair they attacked when Boasson Hagen stopped for a leak,” said the Italian.

In any case, no one is happier than Leigh Howard, who won what was arguably the queen stage of the inaugural Tour of Oman. Revered Muslim cycling commentator Abdul Al Salaam must have know something was up. Before sign-in, he was seen tapping the calves of each Columbia rider, then applying oil and frankincense to Howard’s legs. Never question the intuitive wisdom of Abdul for his lizard eyes have seen much.

Tomorrow the Team Sky daggers come out. Expect no mercy.