Somewhere in Italy, Riccardo Ricco is acting out a variation of a climactic scene from David Lynch’s film, The Elephant Man. “I am not a parasite!”

Speaking with journalists at the HTC-Columbia training camp in Mallorca, sprinter and amateur biologist Mark Cavendish called Ricco a parasite. He said Ricco doesn’t deserve any welcome back bear hugs from the peloton.

“He’s like a parasite coming back. It’s not just the fact of what he’s done, because everyone can make mistakes, it’s that he’s not even sorry about,” Cavendish said. “It’s the lack of regret for all the damage that he’s done, that’s what upsets me.”

Cavendish neglected to offer specific details on just what kind of parasite Ricco was. Is the former Saunier Duval rider, who tested positive for CERA during the 2008 Tour de France, a tape worm, intestinal fluke or hookworm?

As of this writing the Center for Disease Control has no data on the number of parasites in the pro cycling ranks.

However, Cavendish was pretty sure he’d identified Ricco as one. And hasn’t happy that the Italian parasitical organism didn’t seem to possess much of a conscience.

“It’s insulting to the passion that I have and the others have for cycling … and for someone else to not give a shit about that, it’s incredibly demoralizing to have to compete against that,” he said.

Cavendish noted there was a wide ethical gulf between  Riccò’s zero apology approach and the one taken by the Manxman’s good friend David Millar at Garmin.

“(Millar’s) deeply sorry for what he did and he wants to do something right about it,” he said. “It’s about people who don’t regret what they’ve done.” 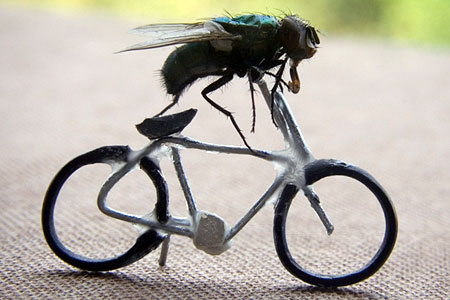 Ricco? Is that you?

In separate news, Cavendish was also candid about the loss of teammate George Hincapie to BMC. “In every single race, he was right in front of me,” he said. “That’s a massive, massive loss to the team. His experience and power will be hard to replace. On a personal level, he was one of my best friends on the team, to share that joy of success with him. It will be hard without him.”

That’s all the news from the Cavendish channel. File under parasite returns, good pal leaves.