With all due respect to Iván García Cortina (Bahrain-Merida) who got his first WorldTour win, it was George Bennett (Jumbo-Visma) and Sergio Higuita (EF-Education First) who lit the fireworks.

They set off in chase of Zdenek Štybar (Deceuninck-QuickStep) with just under five kilometers to the finish line. Bennett rocketed out of the peloton and the young Higuita, riding his first race for EF-Education First, quickly latched onto the New Zealander’s wheel.

You have to love the attacking style of Bennett — and the entire Jumbo-Visma squad. Plus the man always seems to be relaxed and in a good mood. (He’s the psychological opposite of Italian bad boy Gianni Moscon (Team Ineos), who I’ve yet to see smile for anyone over the last five days.)

Bennett won the Tour of California back in 2017 and it’s clear from his performances this week that he wouldn’t mind another crack at the podium. He’s the kind of rider that people naturally like to root for — big, crazy grin, never say die attitude.

At this point it almost seems comical to say, “wow, look, another great Colombian climber.” The 21 year old Higuita came over in a mid-season move after several years with Colombian team Manzana Postobon and the first half of this season with Basque Continental team Euskadi. 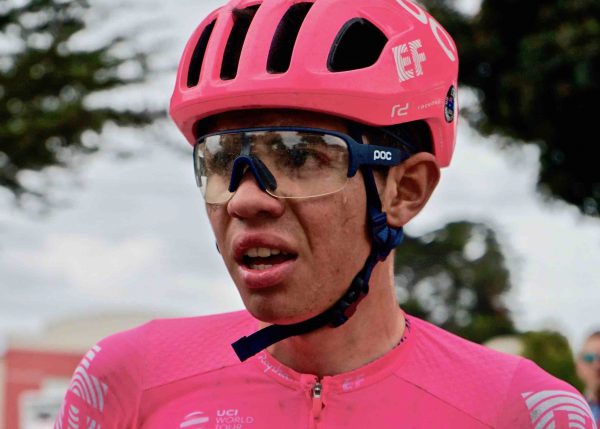 We know he can climb well and team manager Jonathan Vaughters is thrilled with his new mountain goat. What we didn’t know it this guy has a kick on the flats and hits the corners like he’s a crit champion. He looked fearless and confident racing shoulder to shoulder with Bennett.

The two were ultimately caught at the 3k mark, but the signals were loud and clear. First, Bennett is ready for tomorrow’s queen stage up Mount Baldy — where he sealed his victory two years ago. Second, Higuita is the real deal and requires no warm-ups to perform at a high level in a WorldTour race. We’ll look forward to seeing him work with teammate Lachlan Morton to keep Tejay van Garderen in the leader’s jersey on Baldy.

In other words, expect more fireworks.