Lance Armstrong, at the advanced age of 38, is Mister Sunshine.

He trains in Hawaii in the balmy weather then opens his season in the Aussie sunshine at the Tour Down Under. No crazy wet, crash-filled Belgian races for him. Got to warm up those old bones slowly.

He prefers the Spanish sun and a little Mediterranean warmth to pedaling in the driving rain and lashing winds of the Northern Territories. 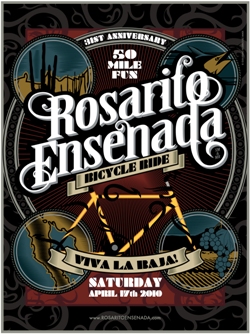 His latest fun in the sun excursion was down to South Africa for the Cape Argus Pick ‘n’ Pay fun ride. Although beset by high winds, he still avoided the terrible conditions in Paris-Nice and Tirreno-Adriatico.

So Twisted Spoke is ready to invite Lance Armstrong to another fun ride in the sunshine. Mexico, Baja Peninsula, 50 miles, the Rosarito-Ensenada fun ride. We buy the first round of margs and the fish tacos.

The route hugs the dramatic Baja coastline then cuts inland after an hour and riders face the dreaded El Tigre climb. Perfect training and threshold work and I will pace you for at least the first 50 feet.

My team, with Paul, Doug and Buzz, will keep you out of the wind as long as possible and stop the little Mexican kids from running in front of your Trek when riders throw out the candy — a traditional activity.

But mostly Lance, think about the sunshine and the after-party. Obviously, things will rock if you and your entourage are there. Lots of shacks down in Mexico and Radio Shack is always welcome.

Fabulous South of the Border fact: they set up 40 massage tables at the finish area and for 20 dollars you get an hour massage. And these women beat on you, they know what they’re doing.

There’s live music, Tecate and Corona beer girls in go-go boots and bikinis, fish tacos galore and tequila by the bucket. Give Johan and coach Carmichael the slip and wreck havoc for a week. Great strip clubs in Ensenada. Just saying …

Twisted Spoke has done this ride four times and seriously, you don’t want to miss this just because Amstel Gold’s the same weekend. Drop me a tweet, talk to my people, bring McConaughey if you have to. Sunshine, Lance, it’s what you need.

Besides, we’re guessing your Spanish is better than our Spanish.