A love letter from France?

The best kind of amour, other than perhaps the surprise visit of some impossibly chic Parisien starlet.

There on our front door step, a package from Nice and Cafe Du Cycliste — and inside, the lovely Lucienne lightweight merino wool jersey ($130)

Cafe Du Cyclist is fairly new on the scene but from what we can see they are off to a flying start. Offering high-end, well-crafted cycling apparel for road and urban riding that has a distinctly French accent.

But back to Lucienne. First off, the jersey comes in grey and the color gave us fears about drab and dated. We were dead wrong. It’s actually a finely woven pattern of light and dark grey that achieves that perfect balance of retro and nouveau, a look back and forward. This is the coolest grey I’ve seen in a long time. It’s the perfect functional and elegant match for a black bib short. 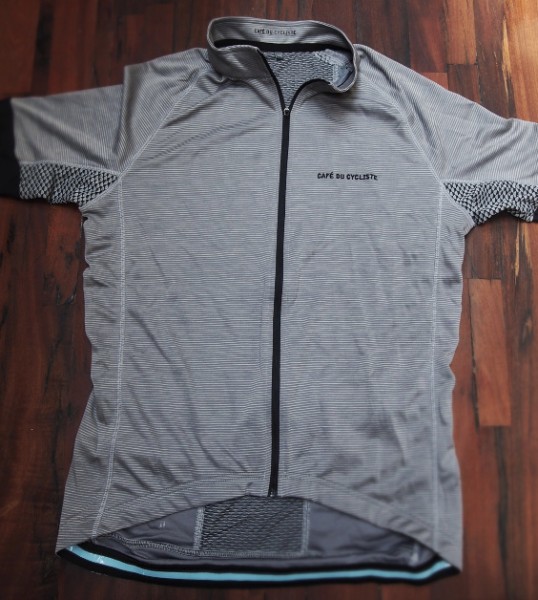 The merino wool, while not having the charming source story of Icebreaker merino, is wonderfully soft. One of the first things we did was turn to the wife, saying “feel this fabric.” It has a nice stretch and while is a lighter weight, doesn’t appear so light it will lose its shape over time. This is quality stuff.

In terms of fit, the Lucienne was terrific — athletically cut through the body but not shrink wrap tight like so many performance jerseys these days. The sleeves were just right and of extra note, they run a little extra long so it’s fab for people like us with really long arms. The extra sleeve also keeps the arm warmers from sliding down and the black color makes black arm warmers look even better. The length thru the torso was also good and it bears repeating once more that this jersey is meant for long, fast days in the saddle, not a meandering nostalgia trip back into cycling history. 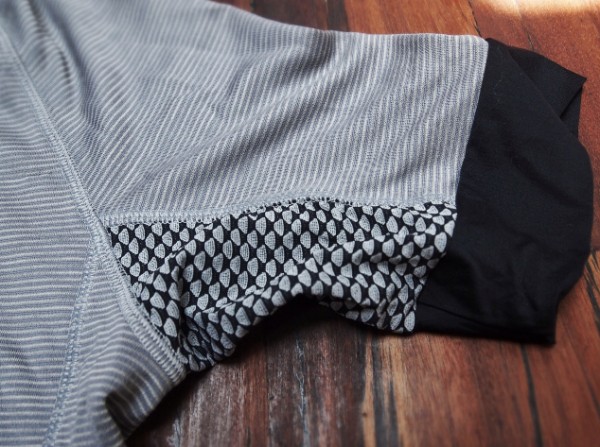 The Lucienne has panels under the armpits and mid-back that are designed for extra ventilation and sweat control. One of the reasons everybody is doing wool these days is because the thermoregulation properties are so verifiably terrific.

Technical fabrics have their tricks but day in, day out, merino wool is a master of cooling and heating. The bonus with wool is always the stink regulation: unlike the synthetics, it doesn’t. That’s another good thing when you dismount and stroll into the cafe. You won’t offend anyone one.

Le details. The Lucienne has plenty of little touches that ratchet up the style points and justify the price. Things like the light blue accent on the silicon gripper band and the sewn-in Cafe du Cyclist signature on the back pocket.

Then there is the extra zip pocket on the outside of the right pocket (which also has small elastic strap on the inside to further anchor your gear.) You can stuff plenty of things in those pockets because there’s a band of support fabric stitched in on the inside of the jersey. You’re good for a six hour ride if you have the legs. 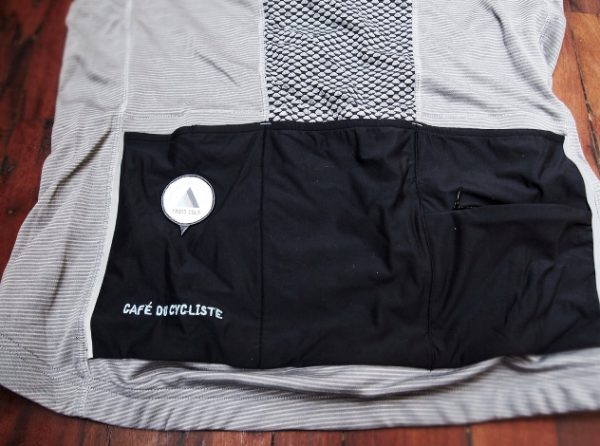 In the last few years we’ve seen an explosion in cycling apparel — the entire urban road, alt chill category has opened up and the fashion choices — from casual to technical, retro to pro race — are fabulous.

Cafe Du Cyciste manages to skillfully hit several of these bases — there’s a bit of Giro’s New Road vibe in the laid-back, non-gaudy, more relaxed attitude to bike riding. You have technical without screaming technical and the Lucienne, along with other Cafe Du Cycliste jerseys and vests, sports a look that goes from bike to cafe with style. No doubt it even looks good in the bedroom, for your afternoon with the French girl. Even the Cafe Du Cycliste socks will be as happy on the bike as at the office. The company does a line of urban apparel with is very much in the New Road strike zone.

In this respect, it’s not a difficult argument to say that Cafe du Cycliste is a bit like a French Rapha. The Brit company is also a fan of merino wool and smart updates and twists on timeless cycling gear. Rapha’s Classic Wool Jersey is $220 versus the Lucienne at $165 at current exchange rates. Advantage: French.

In short, we say bonjour and bonne chance. From all appearances, Cafe Du Cycliste is an exciting new arrival on the road bike scene and we look forward to seeing where they will take us. The Lucienne jersey is a good place to start the discovery. 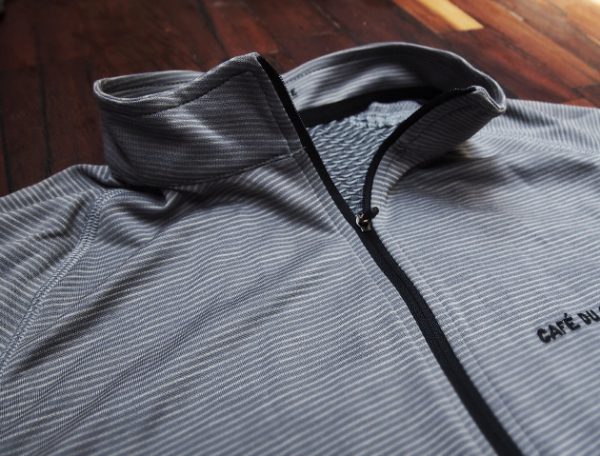