Today I am rabidly anti-doping story. So I’m not going to go into disgusting detail about the toxic waste being flushed out the WorldTour Colon.

Instead, I’m dreaming about the 2013 Tour de France, stage 11, July 10th. That’s the individual time trial from Avaranches to the small tidal island of Mont Saint-Michele.

About 34 years ago, when I was a college French major and impressionable, shy youth, I took the unexpectedly bold move of hitch-hiking to Mont Saint Michel. I was on a holiday break during my French seminar in Rennes, the capital city of Brittany. My professor said you could stay with the monks up in the ancient abbey. 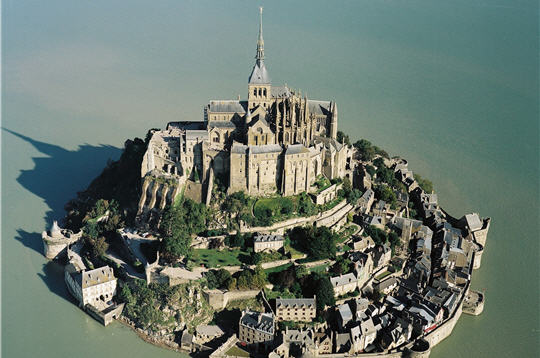 Up in the tower.

Look at the pictures of Mont Saint Michele and you can see why it’s a Unesco Heritage site. From a distance, it’s a mystical and imposing triangle of rock rising out of the bay and tidal pools.

It was rainy and misty that day and I walked the last kilometer or two on foot. Once you reach Mont Saint Michele, you begin the hike up the stone pathway to the  monastery at the top. It’s all stunning but it’s also a tourist site and there’s a noticeable symbolism as you climb higher and higher, leaving behind the commercial shops, like you’re walking toward purity.

Mont Saint Michele was imposing and even scary to me and I didn’t know where exactly to find the entry. Finally, after stumbling around, I decided to knock on a old wooden door. To this day I still think I remember the words of the middle aged French lady who answered the door. “Ahh, ces’t bien vous, Mathieu?” She ushered me in to the Abbey.

It was a long, long time ago but I never forgotten certain things about that experience. I’m not a religious person at all and though the welcome was very warm it was also a strange world for me, like stepping back in time.

The monks had a vow of silence, wore brown robes and only spoke at the communal dinner. I was given a tiny room high up in the abbey. If the Hunchback of Notre Dame had wandered down the hall, he wouldn’t have seemed out of place.

The room was cold and sparsely furnished — a bed, a bible and the world’s tiniest space heater. The window was a tall rectangular slit with an amazing view of the world below and I watched the tides change. It was like going on a retreat and made you think long and hard about who you are and why.

At dinner I was introduced to the twenty or so monks and met Father Bruno. I can’t be sure that was his name after all these years, but it fits. He was the definition of barrel-chested, with a huge voice and booming laughter. The kind of fellow you can imagine doing Shakespeare, his loud voice reaching the farthest seats to the back.

The dinner time conversation was spirited and engaging, the food simple but good. If I remember, they made their own bread and had vegetables from their garden. I would stay for two days and came to realize the beauty of silence until dinner. You find that by the end of the day, all that remains in your head is the best stuff you have to say, the most thoughtful and curious.

The other strong memory was the bizarre one. Father Bruno invited me to attend some kind of musical religious ceremony. Not much “entertainment” at an abbey and I was in an open frame of mind, so I said yes.

We mounted stairs to a small room and really, I thought I’d stepped into some kind of drug dream. People in robes playing strange instruments and chanting things I couldn’t understand. I didn’t know what to do or think.

I do know that I was somehow sad when I left the monks at Mont Saint Michele. I felt welcome there and it was one of those intense experiences where you think maybe you should stay longer to get the full dose. It was the first time I had been impressed by religious people.

I’m sure a few things have changed at Mont Saint Michele and perhaps the abbey is even closed and the monks gone. I suspect Father Bruno and his barrel chest are in Heavan.

I plan to cover the Tour de France starting with the stage to Mont Saint Michele. It will be an incredibly exciting day — Vive Le Tour! — but I’ll also feel the weight of time and memory and nostalgia. I can’t wait to see Mont Saint Michele once more.