Nicholas Roche is at the Tour of Califronia and hopes to exit with “a result.” Something more than finished race, something like a sign of arriving form and should good fortune grin, a stage victory for his AG2R La Mondiale squad. The French outfit is the WorldTean without a win and as they say in French, “merde alor!”

“I’m hoping to be competitive and come out of Tour of California with a result,” Roche told Cyclingnews. “Hopefully I’m already on good condition. The team’s going to ride aggressively, go for the breakaways and hopefully get a stage win.” Should he manage to pull off a victory, you can be sure his dad’s fashion dictum: no unzipped jerseys flapping in the wind. 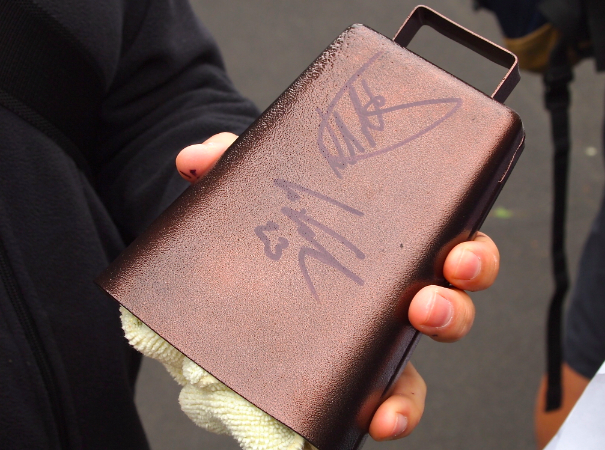 Things may just be looking up for the Irishman because even before the race began he’s already experienced a new first. Standing outside the team bus, a fan approached for an autograph — not a jersey or program but something more inetesting. A cowbell. Roche applied his signature and then said “that’s the first time I’ve signed something like that.”

We’ll see if the cowbell will bring him any luck in this year’s race.