Tyler Farrar was six seconds from winning two stages in a row at the Amgen Tour of California. He’d won the day before, beating all-world Peter Sagan in the sprint along the shoreline in beautiful Santa Barbara.

He’d knocked off Cavendish in the 2011 Tour de France and now he’d just scalped Sagan. In a career of violent ups and downs, he was way up, sky high, on a roll.

That was terrific news for Farrar who looked back down the road to see half the top sprinters dead.

He’d made the move of the day, staying awake and at the front of the race in the crosswinds when Voigt and RadioShack decided it was time to wreak havoc in the winds.

Farrar was in a select group with a 30 second gap, then 40 and finally a minute on the chasing peloton. Sure, Sagan had jumped on the acceleration and Hushovd, too, but he was confident after his terrific win the day before. 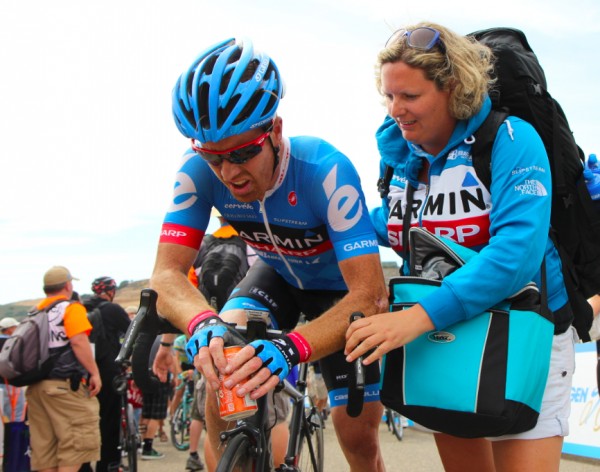 This was his kind of race, Belgian style, a classics vibe, crosswinds and fast shifting tactics dropped onto a California road headed to a beach town.

It was a strange break composed of three sprinters and three GC leaders in Tejay Van Garderen (BMC), Michael Rogers (Saxo-Tinkoff) and Matthew Busche (RadioShack). They all went full gas and then Voigt somehow found even more gas or fountain of youth or gallon of Red Bull. Maybe all three.

Voigt attacked with five kilometers to go. Afterwards, he couldn’t believe they let him go. It was textbook Voigt, the late power move from the old man and nobody did much to bring him back.

The final kilometer was a tricky set of tight turns and then what the brit cycling journalists like to call a “draggy” uphill finish. Voigt should have died on that final ramp up. He’s 41, nearly retired with six kids and a wife who is probably thinking she could use some help at home with the dishwasher and laundry.

How does Voigt manage to pull off these astonishing attacks? He did the same thing in the US Pro Cycling Challenge in Colorado last August, riding solo for something like 100 miles and snatching the victory with the entire peloton riding against him.

Tyler Farrar was planning on Voigt’s eventual demise, somewhere in the final 500 meters. A power outage, legs unable to shut up any longer, game over.

Because Farrar is on his A game and moving faster up that final short finishing grade — faster than Sagan or Hushovd, the Fastvaskian and a former world champion.

Six seconds after 4:41 in the saddle. Hammering up the hill, turning himself inside out while the fans cheer and eat their turkey wraps and sip their pinot noir. He’d beaten everybody in the race except the oldest guy in the race. Can that really be true and who thinks irony is so funny?

Fifty meters past the finish line, Farrar collapses on his handlebars, hand holding an Orange crush. Crushed is the word.