Brent Bookwalter took an impressive third in his rocket shot downhill from the Garden of the Gods into Colorado Springs. Today was the opening prologue of the inaugural US Pro Cycling Challenge, also known to most normal people as the Tour of Colorado.

Patrick Gretsch of the soon-to-be-defunct HTC-Highroad won the 5,2 mile prologue (8.3k for those in euro-land) but Bookwalter was just four seconds back, and five seconds faster than his Tour winning captain Cadel Evans. 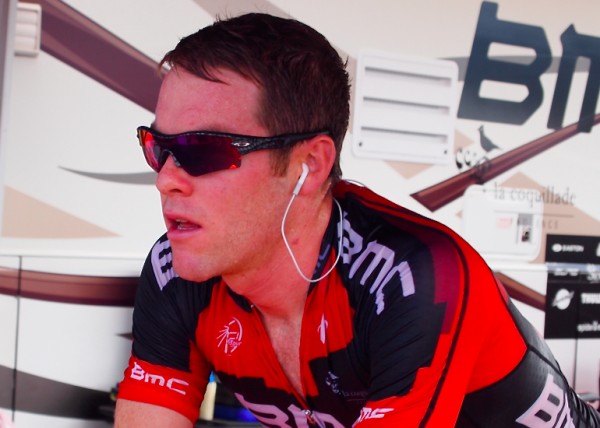 Working up a sweat.

When we interviewed Bookwalter two weeks after the tour, he had this to say about Evans. “One thing that Cadel has done, that’s opened my eyes, is his preparation. Not just physical but mental. He’s got notes on his phone, notes on a notebook, pictures and videos. You think you’re training hard, you think you’re doing everything you can, then a guy like Cadel comes along and shows you there’s so much more you could do.”

Bookwalter was certainly well-prepared today and he’s learning fast. The course was short, at high altitude and mostly downhill with one hard hairpin and then a straight shot home into Colorado Springs. The warm-up was crucial because the effort would be so short and intense. He hit everything to perfection.

At the last recon camp in the mountains before France, Bookwalter played body double to fool journalists trying to Evans. You could say that in Colorado Springs, Bookwalter looked more like Evans than the Aussie himself.