Tejay Van Garderen is the Alfred Neuman of professional bike racing. When we were growing up, Neuman was the freckle face kid from the satirical Mad Magazine. His signature phrase was always, “What, me worry?”

The young BMC rider (and newlywed) recently spoke about the pressure he likes to put on himself. What’s amusing about that is that judged on outward appearance and facial expression, Van Garderen feels no pressure whatsoever.

We’ve seen Tejay at the Tour of California and Tour de France and his look is always the same. It’s a California-esque update of Neuman, a bemused and almost bored expression that seems to say, “hmm, cool, bike race, this might be fun.” 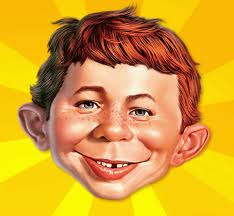 “I just want to have goals for myself and live up to the pressure that I put on myself,” said Van Garderen. Well, that’s a heap of pressure because his goals for the coming season are big and endless.

“I’d like to have a strong showing at Paris Nice, Tour of California, make the Tour team and then hopefully the Olympic road race team,” said Van Garderen. “Then I’d like to peak again for the USA Pro Cycling Challenge and then participate in the Worlds road race and team time trial.”

Sounds easy, huh? Basically, he needs to be on form pretty much the whole season. What makes all that possible is perhaps explained by how the young rider from Tacoma, Washington handles pressure — both internal and external.

FIrst, he’s not afraid to apply pressure as a motivational tool. Before last year’s Tour of California, the 22 year old kid told the media his goal was to win the race. Pretty bold talk but it was appreciated eventual winner 39 year old Chris Horner.

When we interviewed Horner after the race, he had this to say about Tejay’s pronouncement: “I liked it. I thought it was good for a young kid to come out and say that. I think it’s good for his confidence,” said Horner. “It’s good because sometimes you have to put some stress on yourself. I think that’s what he was doing.”

Clearly, Van Garderen is skilled at knowing how much psychological stress to place on himself. As far as external pressure, we talked with Tejay at the top of a mountain in the Pyrenees during this year’s Tour de France. It had been a brutal day of climbing but Van Garderen was standing around like a fan who just wandered over in hopes of an autograph from Andy Schleck. He’s cool, relaxed, doesn’t appear to have a care in the world.

There’s a kind of imperviousness to outside pressure that marks Van Garderen as a possible grand tour winner. Nothing rattles him, nothing diminishes his self confidence, nothing distracts him from his goals.

It’s going to be a big and challenging year for Tejay Van Garderen at his new BMC squad. Somehow, we’re not worried about the pressure getting to him.