Two goodies for you today my cycling brethren huddled around laptops all over the world.

First, if you haven’t discovered BMC’s web magazine Tempo, it is definitely worth a peek. Second, I just read a great interview with cycling photographer Jared Gruber in said Tempo magazine.

In the last say three-four years, Gruber has become one of the hot cycling photographers and there’s no doubt you’ve seen some of his fabulous images. The interview is interesting and Gruber comes across as exactly the person he is: genuine, passionate, down-to-earth and a super nice guy.

Before Twisted Spoke ever got off the ground, I had a chance to work with Gruber when he was working for the Pez cyclingnews website. I was covering my first stage race for Pez, the 2010 Tour of California, and feeling way in over my head. After each stage, I’d hunker down, pound out some disjointed nonsense and email it to Gruber who would put it all together with photos from Darrell Parks. 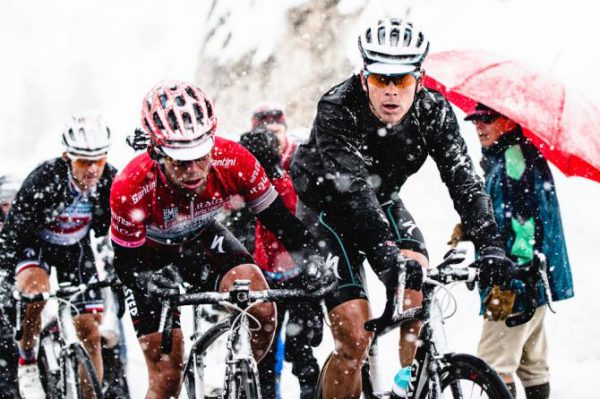 I kept in touch by occasional email with Gruber and when he told me he and his girlfriend Ashley were moving to Europe to travel and do cycling photograghy, I was impressed and jealous. I wished I was in my late 20’s instead of 52 with two kids and a pile of financial responsibilities. So yeah, jealous is the word.

Well, by the look of things, his adventure has turned out damn pretty well and I’ve seen his awesome shots from Flanders and the Giro d’Italia and plenty of other big races. Even from afar, I get a small kick out of watching him take off. He’s a good lesson for us all that dreams can happen if you simply insist on heading toward them.

This last Tour de France, I ran into Jared and Ashley on Alpe d’Huez and more specifically Dutch Corner. I’d pitched Cycle Sport magazine on a spending a day there wallowing in the drunken and passionate vibe. I was doing a fabulous job wallowing — about seven beers in, really, I’d lost count — when I saw them shooting the Dutch fans doing their crazy seated rowing routine on the side of the road.

“Who you shooting for?” I shouted over the Dutch Techo music and Jared said Cycle Sport magazine. Well, I had to smile and laugh. Jared was shooting the images for my story and instantly I felt in very good hands. No matter what gibberish I wrote, at least the photos were sure to look tremendous.

So check out the Tempo interview with Gruber and be sure to visit his website. With any luck, I will see Jared and Ashley again on some roadside in Europe.