Wiggins: "I'm a better rider than Lance." A perspective from Hey Arnold and Dirty Harry.

Wiggins: "I'm a better rider than Lance." A perspective from Hey Arnold and Dirty Harry.

As grandpa once said on the old “Hey Arnold” cartoon, “simmer down, you hot headed looney.” Bradley Wiggins, your yap is flapping.

At a track meet in Manchester called Revolution 26, Wiggins talked up his podium chances in the 2010 Tour De France. And talked down a certain seven-time tour winner.

“It will make for an interesting race,” said Wiggins. “And I still think I’m a better rider than Lance and a few of the other guys.”

Twisted Spoke is a big fan of the crazy-funny brit, his 60’s mod haircut and The Jam-era musical tastes. Garmin is just about our favorite team, led by Jonathan Vaughters, the argyle genius. But Brad, don’t be dissing the Texan. Bad tour karma.

Wiggins’ bold statement reminds us of the outlandish claim Gilberto Simoni made after he won the Giro and his head grew to be the size of the cartoon Arnold, the kid nicknamed “football head.” 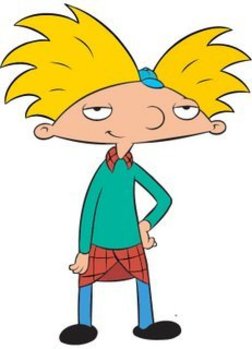 Simoni started thinking the Tour de France would be no harder than the Giro.  “I can take Lance in the mountains,” boasted Simoni. If memory serves, Gilberto didn’t even make the top twenty in the tour that year.

“I’ve put on a bit of weight, lager does that to you but I’m not really thinking about diet,” said Wiggins. Maybe it was the lager talking and a home crowd of friendly English jounos but loose lips lose tours, baby. Shoulda stuck to the pomegranate juice.

The climb-heavy and time trial lite tour would seem a drawback for Wiggins but he feels just the opposite. “”A lot of people think it won’t be a great Tour for me but that first week if anything is advantageous to me,” said Wiggo. “Those cobbled stages could have big gaps to the guys like Andy, Contador, and the guy from America.”

Time for Garmin teammate Christian Vande Velde to get on the horn and cool Wiggins down. Underdogs and dark horses do best with their mouths shut. There’s no question Wiggins blew expectations apart in the 2009 tour. He’s a new rider and no podium step is too high.

Then again, Clint Eastwood once said in his classic Dirty Harry voice, “a man’s got to know his limitations.” We suspect a lower profile would serve Wiggins better.

Let Armstrong and Bruyneel and Contador tear each other apart in the press. Let them draw all the attention and media hoopla. You just get your argyle ass ready to ride. Damn, couldn’t resist the foul alliteration.