Ouija board question for the Tour de France: who will be the GC leader of Radio Shack?

Well, it’s a tough call with Tour of California winner Chris Horner owning the form and confidence of his life. Not  easy with recent Tour de Suisse winner Levi Leipheimer rightfully talking up his experience and chances in La Goddamn Grand Boucle.

Is Bruyneel a spiritualist?

Like a little sauerkraut with your Tour prognostications? Then you’ve also got Radio Shack’s Andreas Kloden who won the tough and vicious Pays Basque, finished second in a brutal wet and cold Paris-Nice and came close to beating Fabian Cancellara in a time trial. Another old diesel train that keeps chugging.

Already that’s six legs to deal with and maybe that’s more than a board game can handle. Then again, c’est pas impossible, mon ami.

The Hasbro toy company put the ouija board together with quite a number of other worldly powers. To quote the wiki, “it uses a planchette (small heart-shaped piece of wood) or movable indicator to indicate the spirit’s message by spelling it out on the board during a séance. The fingers of the séance participants are placed on the planchette, which then moves about the board to spell out words or become physically manifested.”

In other words, Horner or Leipheimer or Kloden will manifest but we sure are wondering just what team manager and web-site described genius Johan Bruyneel is thinking. 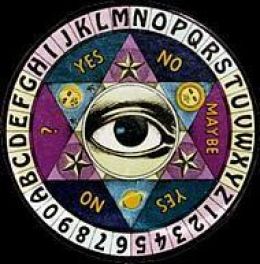 Because there are actually eight legs in this game, a veritable octopus of complications and possibilities and potential podium step grabbers.

The last two legs belong to Janez Brajkovic, one of the few riders who actually beat Alberto Contador in something of value, that being last year’s Criterium du Dauphiné. A pre-clenbuterol challenge where Contador has some near-human moment of fallibility.

The mountains and the legs will decide as always. But that first week or so, who on Radio Shack is keeping all four guys out of the wind and topped off with food and water?

Sounds like a big job for those electro-gizmo guys.