This Tour de France has been marked by quite a number of crashes. That’s been an on-going story and given the bad weather over the first 10 days and a dangerous, wet ride over the cobblestones on stage five, that’s not an unexpected consequence.

What has been a bit of a surprise – unless you’re a WorldTour team doctor – is the number of riders who are suffering with bronchitis. World Road Race champion Rui Costa just withdrew with the lung inflammation and he’s only the latest victim.

American Tejay van Garderen has been battling bronchitis with antibiotics. Richie Porte of Team Sky saw his shot at a Tour podium ruined by compromised breathing. A sizable cross-section of the peloton seems to be wheezing and hacking their way toward Paris.

The common symptoms of acute bronchitis include: sore throat, shortness of breath, fatigue, runny nose, nasal congestion, low-grade fever and malaise. Which are not good conditions to have when racing for three weeks across France and up the Alps and Pyrenees mountains. 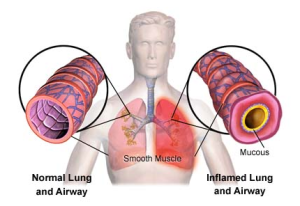 What’s interesting is that the Tour cure for acute bronchitis is antibiotics but that’s generally not recommended because the cause is a virus, not bacteria. To quote a comment on the road.cc website:

“Why do they always seem to be prescribed antibiotics? Antibiotics for colds or bronchitis is something the NHS is trying to stamp out. They’re caused by viruses, which are not affected by antibiotics. Antibiotics are only recommended for particularly vulnerable patients, to prevent the possibility of pneumonia developing. Maybe pro cyclists fit that category, since extreme physical exertion suppresses the immune system?”

In any case, cover your mouth when you cough and if a teammate hands you a water-bottle, ask him to clean it off with a disinfectant wipe first. O remake him wear rubber gloves to keep the virus away.

Even before the Tour de France, bronchitis was in the cycling news. Sprinter Mark Cavendish had to skip the British National Road Championship because of the bronchitis he’d picked up while riding the Tour de Suisse.