Not everybody at the Tour de France is riding those 12 grand carbon race bikes. I shot this big-wheeler out the window of my car driving back to Lourdes after stage 17 from Pau to the Col du Tourmalet.

It had been a long and somewhat underwhelming day. That was the final mountain stage of the Tour and Andy Schleck last and slim chance at beating his rival Alberto Contador. (The day before was the famous rest day when the Spaniard tested positive for traces of clenbuterol in his steak.)

The weather was cold and misty and I set off walking from the salle de press hiking up on Tourmalet to walk the final 3k or so to the summit. My mistake was misjudging the time requited and starting late. When I arrived at the top, the large crowds had already taken over the steep hillside above the finish line.

Between the crowds and the mist, I barely saw a thing. I heard the roar of the crowd and barely spotted Schleck and Contador emerge from the mist, side by side. More cheers, finish line, walk back down, not worth the effort period. It was a 45 minute hike for a 10 second view of a tie. I didn’t even get to see Jurgen Van den Broeck ride right through French president Sarkozy’s retinue.)

By as was often the case with my Tour de France, that grand, sprawling, chaotic, beautiful and spontaneous circus, there were two unexpected, memorable and cool events that happened shortly after that stage.

Since I quickly retreated back down the mountain from my disappointing experience at the summit of Tourmalet, I happened to be the first to see American Chris Horner stop by a Radio SHack soingeur He was coughing, exhausted, looking like he’s just aged 10 years and he was already 38. 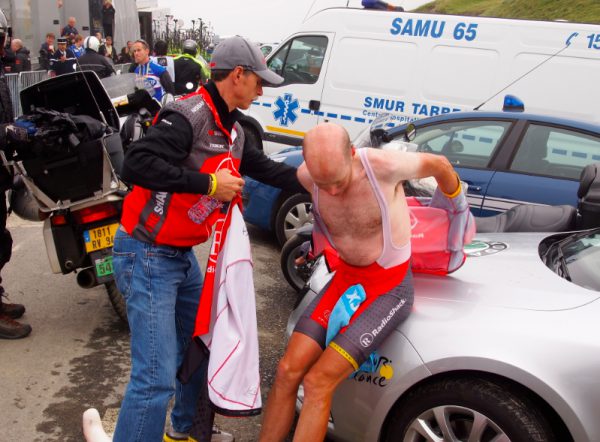 It was one of those personal moments before the media descend where I stood 10 feet from Horner and watched an amazing recovery process. He barely had the strength to strip off his jersey, completely drained, toweling off slowly, then slipping on a dry clothes and taking a drink. He’d just secured an impressive 10th place in the Tour de France and in another minute the press was on him like a rugby scrum.

In those few minutes his recovery process was truly impressive. In just minutes he went from dead to animated, smiling, cracking jokes, taking question after question, TV cameras and recording devices in his face. When long time tour journalist John Wilcockson interviewed him, Horner joked that Wilcockson had a piece of food caught in his teeth. That’s one of those moments you don’t get watching the race on Versus.

The second surprise was the Frenchman on his big wheel knocking out his kilometers along the French countryside. At first, I always thought is was a mirage, this perfect snapshot of cycling history pedaling along ahead of me. I accelerated past him so I could take a photo when he went by. An indelible image from my first Tour de France and one that always makes me smile when I see the picture again.

Will Chris Horner, now at age 39 and possessing an astonishing power of recovery, really make the top five in the Tour de France? He says the podium is a definite possibility. WIll I see Monsieur Big WHeel on the road to Lourdes again. On verra bien.