Team Sky's David Brailsford and Uncle Fester: this explains everything.

Team Sky's David Brailsford and Uncle Fester: this explains everything.

Separated at birth? Brailsford and the Addams Family's Uncle Fester.

Team Sky principal Dave Brailsford is the bald, bogey man of cycling. The arch villain in the Wiggins theft, the bloated skinhead who hounded Garmin until they let the British rider go.

Why are we wondering? Add some dark eye shadow and Brailsford is a dead ringer for nut-ball and comedic genius Uncle Fester from the hilarious 60’s TV show, The Addams Family.

Fester is described in the wiki as a completely hairless, hunched, and barrel-shaped man with dark, sunken eyes and often a deranged smile. He always wears a heavy, full-length fur coat.

Yes, that fits Brailsford to a T. The only question being, where is he hiding the full length coat? When SKy wins its first big race of note, don’t be surprised to see the bald B in full furry regalia. And if Wiggins ever wins the Tour de France, Brailsford will do the Uncle Fester light-bulb trick. 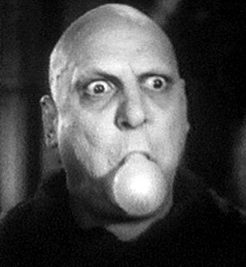 According to the character write-up, Uncle Fester (aka Dave Brailsford) suffers from severe migraines that can only be relieved by putting his head in a screw press and tightening it.

No wonder Brailsford pursued Wiggins with such relentless obsession — he was running out of aspirin, folks. Now, it’s Garmin boss Jonathan Vaughters with the migraine.

One note of disturbing import: in the TV show series, Uncle Fester feeds his garden plants on blood plasma. Holy crap — it’s  Operacion Puerto all over again. As we like to say at Twisted Spoke,  one blood bag closes, another opens. Fester also collects three-dollar bills.

Watch out for Team Sky. Good or bad, we’re going to hear a lot more from Uncle Fester, I mean, Brailsford.