Tchmil. I got Di Luca for nothing.

In his racing days, Russian Andre Tchmil was the very definition of a classics hard man. He had that rough beat up face — like he’d smashed it a dozen times on the cobblestones — because it was fun.

Like most guys from Eastern Europe, he kept talk to a grunt minimum and raced with a relentless brutality. Once retired and running Katusha — the Global Cycling Project! — he dressed in that dark Russian gangster  style with pointy black Italian shoes.

You don’t want to disagree with this man, anger him, annoy him, you do not want to scratch his car or owe him money. His stoic, slighly bemused look said he’d seen it all and there wasn’t anything he couldn’t handle quickly, with force if nessessary. Tchmil reeks old school and it would be tempting to guess he’s pretty one dimensional as a personality. 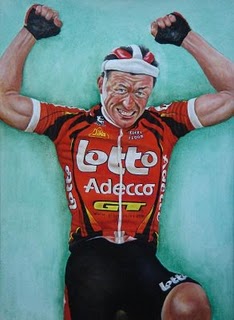 So it comes as head-smack surprise to discover the unexpected sides of Andre Tchmil’s character. The man is creative, emotional, bold, forgiving, he weeps, he holds your hand to the fire. He is the patron saint of wayward bike racers.

First, there was the invite he extended to the anti-Tchmil, the flamboyant Lion King Mario Cipollini. Sounds like an oil and water mix or maybe maybe oil and vodka. You’d think the no-nonsense, hyper serious Andre wouldn’t want to be in the same country, let alone team bus with Super Mario.

However, it turns out Tchmil has a huge respect for the Italian’s preparation and work ethic and valued Cipo’s interest in passing on his sprint experience to the young Russkis. Deal done and only Pozzato is puzzled.

Then this week we have Tchmil turning all Oprah Winfrey practically shedding tears over the plight of poor Danilo di Luca. After hearing of Di Luca’s school children confession, the Russian was deeply moved. When he read of Di Luca’s spiritual journey with his personal priest Don Marco, he jumped on the phone to the EPO CERA aficionado.

“I’ve realized that Di Luca wants to make a real comeback. He’s not coming back for the money but because he loves this sport. He’s been in a tunnel but now he’s seeing the world from the other side,” said Tchmil. “Today I’ll go back with Di Luca and don Marco to Possagno and sign his contract in front of the school children.”

Credit Tchmil for theatrical style points and making sure he has a least 100 notary witnesses (though legally underage) to watch Di Luca’s signature. He’s making sure the Italian understands just how horrible it will be to disappoint the kids.

Despite the beautiful charity moment, the weeping, the glowing faces of the children, the blessing of Don Pedro, Tchmil drove a hardman’s deal. There’s no long string on zero’s on Di Luca’s contract — there’s one big fat zero. Di Luca rides for free. Yes, Andre the giant negotiator gave Di Luca some love and respect but no euros. Di Luca drops several income brackets but doesn’t have to worry about taxes.

“I can’t deny that I made an indecent proposal to Di Luca,” Tchmil said.  “But life is hard and sometimes you’ve got to know when to help people. He told me ‘I’m a new man’ and I told him that I’d take him if he rode for free. I told him ‘If you’ve got talent, prove it. I’m counting on your honesty and your word.’”

Tchmil scored the deal of the century. A grand tour rider willing to ride support in of teammate Joaquin Rodriguez at the Giro d’Italia for just pasta and a few gels. And the pleasure of making the children smile and continuing his spiritual studies with Don Pedro.

Apparently Di Luca preferred to ride for free for the Russians when he could have picked up a salary and a diamond-crusted timepiece from the Christina Watches squad. Di Luca spoke of “premiums” when discussing his contract so perhaps Tchmil will at least give Di Luca a Russian Rolex knock-off.

Now we’ve had fun with Di Luca over the last few years but Twisted Spoke admits we’re happy to have the flashy rider back . (Although it’s outrageous he didn’t serve his full two year ban.) He doped but at least he wasn’t a dull quote like Valverde. His classic “conspiracy theory” explanation for his positive dope tests were always amusing and unsubstantiated.

We’re also willing to accept his nearly religious change of heart for the 35 year old rider. The man’s in the final stage of his career and being the egotistical guy he is, the question of legacy has taken precedence over hairstyle. How will Italy remember him in ten years?

In any case, Twisted Spoke is impressed by the brilliance of Andre Tchmil. A hardman with a heart of gold and his take-it-or-leave-it negotiating skills. Danilo di Luca may be a “new man.” He’s also a poor man.