We had a quick chat with Garmin-Sharp’s Phil Gaimon at the Tour of California about his new book Pro Cycling On $10 A Day.

We’d just started the hilarious insider look at what it takes to make it as a pro and ripped through the first 150 pages without a break. The stories were that amusing and engaging. It was as much fun as bombing down a long, winding mountain road.

Gaimon is a natural writer and his personal tales are funny, insightful and shocking but always entertaining. We highly recommend the book and we’ll have a full review out shortly.

TS: Any reactions from fellow pros about the book?

PG: Yeah, most of my friends have read it and liked it. I got an emotional call from Brad Huff and Jeremy Powers because I said nice things about them.

TS: That first story about a crazed Powers playing the drums — I don’t know that that was flattering.

TS: What did mom and dad think?

PG: I think now they get it that bike racing is a thing. They were at Nationals last year when I almost won and having a near heart attack at the finish line. 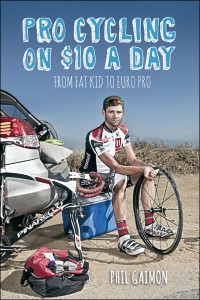 TS: Were you too honest in the book? Does it feel odd to see some of those guys you wrote about at the races now?

PG: I didn’t want the book to be about that. I didn’t want to make anybody look bad or bitch about what happened in the past. If it came off like someone mistreated me, I would try to explain their motivation. The main point of the book wasn’t so- and-so did this to me, it was bike racers were expendable at that level and I was treated as supply and demand dictated.

TS: Any bad reactions from anybody?

PG: Not really. I imagine it takes longer for the people who don’t like me to read it or find out about it. (LAUGHS)

PG: It’s a blast, it’s not easy. In a way I’m sacrificing money and what I could do elsewhere in life to do something that’s a ton of fun.

TS: Dave Zabriskie said he had to act crazy funny because other guys took bike racing so seriously. Ever feel like that?

PG: On this team the atmosphere is awesome but you got to know when to keep your month shut and be serious and listen in meetings. You’ll get to another part of the book on other teams were guys are staring at the race bible for five hours. Then I need to end the meeting and be an asshole. That doesn’t happen on this team. I always say no matter how you’re doing in the race, if you’re having fun at the dinner table, it’s kind of a win.

TS: You talk about the beauty of the sport. What is that for you?

PG: Every training ride you go on, you’re riding the the woods, you’re out in nature and it’s just you and your mind and your legs. It’s a beautiful thing. Part of it is just an addiction to wanting to know what you can accomplish and what you can do and how far you can go. I wasn’t ready to stop until I know what potential I have. It’s pushing yourself as an individual. I’ll keep battling until I get there.

TS: You’re pretty outspoken about clean cycling. Why take the doping issue on in such a vocal way?

PG: Well, I feel like I do need to do that. I feel like in this sport, there are so many questions. Even today I get people who say “you’re friends with Tom Danielson, that guy doesn’t get it.” There’s a shadowy spirit that’s holding the sport back, there’s no denying it.

TS: Have you ever had a conversation with Tom about all that?

PG” Yes, 100% cent. The thing is, I could have a five hour conversation on this — I could write a graduate thesis. But when Vaughters came to Tom and Zabriskie and Christian, he said “I’m doing this team and you’re gonna be clean and I mean it and that’s it. And you’re gonna suck for a couple of years until everybody else catches up and gets off that stuff, too.”

TS: I think he’s done more for clean cycling than anybody else ….

PG: Well, I think Vaughters should be applauded for taking that step and having that realization. And those guys — when they took that offer, they were taking a risk with their careers. They weren’t gonna get results for two years when they could have stayed on a shitty team and kept doing this crap. They took a gamble for a cleaner sport and they all went the right way. It’s just understanding that and knowing it was a sacrifice and a risk on their part and it worked out.