I could tell you that Christophe Riblon (AG2R-La Mondiale) won the first stage in the Pyrenees up to Ax 3 Domaines but you already know that.

I could tell you Andy Schleck and Alberto Contador marked each other all the way up the the hors categorie Port de Pailheres and the categorie one Ax climb but you already know that. 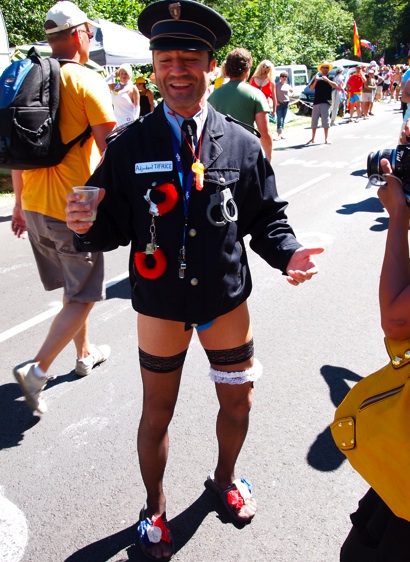 I could tell Denis Menchov, the silent assassin, and the craft Spaniard Samuel Sánchez (Euskaltel – Euskadi) gained a small but useful amount of time in their battle for third place but again, you read that hours ago.

What you can’t possibly know is what I saw two kilometers from the finish: the fake policeman in the thong, the man dressed as a giant condom, the freak pretending to be a new born baby. 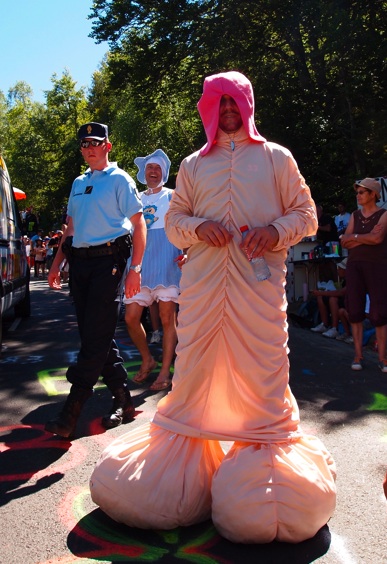 Nor should I leave out the drag queen in white dress and summer hat, the strange person who claimed to be two scoops of ice cream with a strawberry on top, the inflatable doll with blue feather boa, etc shocking etc. They leave that stuff out of the race reports because it seems so, you know, un-heroic.

You know you missed that story and God knows you want it bad. Twisted Spoke finally got an up close and inebriated look at what we’ve always seen from afar. The Tour de France freak show that always happens in the Pyrenees. 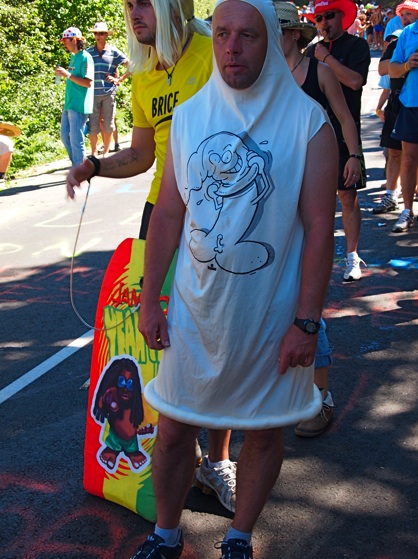 We have been to the mountain and it was a party. Most of these guys were from Bordeaux, including the half naked cop who did stand-up comedy with every vehicle that came up the road. Note the small plastic penis dangling from his neck.

They had their own fully stocked cash bar. In fact, the bartender apologized because the main impresario, who apparently dresses as a rabbit, had work commitments and was too busy to join the spectacle. There were plenty of freaks left. 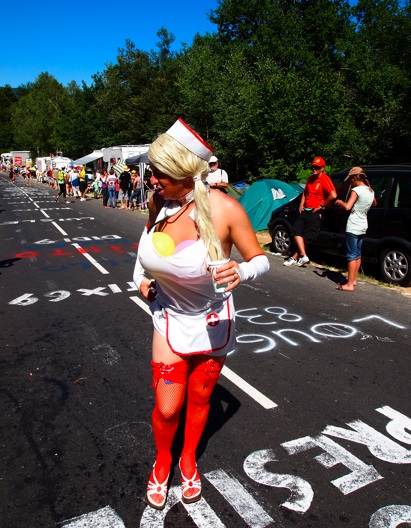 It was insane when the riders finally bolted past us. Three and four deep, howling madness, soccer hooligan cheers. I seriously doubt if Contador or Schleck really paid any attention. They were too focused on each other to enjoy the comedy. They’re professional athletes and this isn’t the tour of the Latin Quarter in New Orleans. Besides, it’s well documented that laughter has a negative effect on power output.

It was a wild and crazy show we’re glad we didn’t miss. There’s a matinee on Monday up Port de Bales and yes, that Tour de France thing is still going on, too.