Is this the way to beat Cancellara?

Since losing Paris-Roubaix and the Tour of Flanders to Saxo Bank’s Fabian Cancellara and his angel good luck charm, Tom Boonen has been search for some angels of his own. Twisted Spoke did a quick shopping trip for the Belgian.

The Guardian angel from the California Astrology just might to the trick. It claims the Angel will relay your prayers directly to God. Prayers like, “please oh Lord, make me go faster, don’t let me lose his wheel.” You know, heavy religious stuff straight from the old testament.

Then there’s the Guardian Angel from the Luck Factory — now that’s a company with a promising name, Tom. This angel goes for only six bucks — a steal if it delivers a win against the Swiss champion.

We also checked out the angel offerings at Church Supply Hardware — does God really have “hardware?” — and they are loaded with top quality, super lucky, guaranteed to help you win races, medallions and medals. 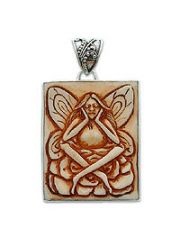 Now if Tom Boonen really wants to throw some money at the Angel thing, we can nab the 18 karat gold Angel pendant with diamond granulation from Temple Saint Clair. That’s got to possess more power than that cheesy kid’s trinket Cancellara has in his jersey pocket.

The Novica web site has a gaggle of angels including the sterling silver “Thoughtful Angel” pendant. You bet Tom’s thoughtful as Hell right now, as in “how am I gonna beat this Spartacus dude?”  It’s a bone pendant with an antique effect and  surrounded with sterling silver. A nice touch with a Quick Step pro kit.

But maybe Tornado Tom needs to kick it up a notch, get a little nasty, bare the fangs. Vampire designer Avelina de Moray has a Hell’s Angels pendant that’s a sure fire Cancellara killer.

As we always say in the world of advertising and marketing, why not collect the whole set? If you can’t out-ride fabulous Fabian, then out-angel the man.

The key is to get God on your side, work the heavenly powers — and next time bring Heaven to bear on the Hell of the North.