Twisted Spoke woke up on the wrong side of the peloton. A few thoughts:

1     How hard is David Millar willing to ride for Mark Cavendish if Garmin teammate Tyler Farrar has a shot at winning in the final 1000 meters? A tough call because Garmin is a tight team and the Manx Missile has been openly dismissive of Farrar for two seasons. There’s also no love lost between Garmin and HTC-Columbia for reasons that nobody can really explain. TS thinks Millar will ease off the gas ever so slightly if he thinks Farrar has a rainbow.

2     Xacobeo-Galicia team director Alvaro Pino announces his retirement. He gave the usual time honored reason of spending more time with family. But TS thinks he’d wrecked his throat screaming obscenities at his top rider, Ezequiel Mosquera. He admitted during the Vuelta that he used public insults to motivate Mosquera and the three week torrent took its toll. He heaped one final round of obscenities at Mosquera for leaving for Vacansoleil and then quit.

3    Those crazy Riccos and Rossis. Enrico Rossi of the Flaming Ceramics team was just arrested by the Italian anti-drug unit NAS. Enrico is the brother of the beautiful and sad Vania Rossi (herself under suspicion of doping for a failed A test) and the brother-in-law of doper Riccardo Ricco. Family get-togethers with the Riccos & Rossis must be a fascinating and unique affair. We’re assuming the topic of conversation revolves around how to beat dope tests and where to get cut-rate EPO.

4    Lost in the swirling storm of the Landis doping allegations is one name we’d somehow missed: sports physiologist to the stars, Allan Lim. Landis claims Lim supervised blood packing for Levi Leipheimer among others.

What’s interesting to TS is that Lim left Garmin for Radio Shack in November of 2009. The news story was that it was time for Lim to move on and Garmin didn’t have the deep pockets of Lance & Company. Now, well, in light of Landis’ claims, perhaps Jonathan Vaughters decided it was best to keep his team as squeaky clean as possible. Not saying, just wondering.

5    Dusty headline from Cyclingnews:  “Bbox’s Bernaudeau prepares for key Sponsorship meetings.” Uhh, that was back in early March. Six months later this is the headline in Cyclingnews: “Bernaudeau still optimistic of finding new sponsor for Bbox.” That’s pretty durable optimism.

You have to wonder about the health of cycling in France. This is a popular, well-run team that had a very successful season including two stages win in this year’s Tour de France and the polka jersey for the King of the Mountains. What more does a sponsor want? Now, star Fedrigo has split to FDJ taking with him the biggest nose in cycling. Quel dommage.

6    Oscar Sevilla tested positive for the blood plasma volume extender HES (say that fast a few times.) This was based on a urine test during the recent Vuelta a Columbia. Drugs, Columbia, odd. Anyway, the former baby-face was frustrated and enraged and of course innocent. Anyone with two brain cells to rub together will have a hard time believing Sevilla.

Look at the man’s resume: Kelme (institutionalized doping program), T-Mobil (organized doping program) and Rock Racing (history of signing riders coming off doping suspensions and about to get more.) Ahh, Operation Puerto, the case book is closed but it never stops giving. 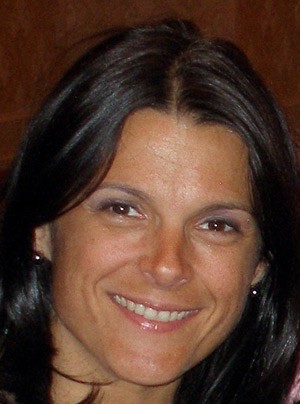 7   We’re just saying because it’s true: Betsy Andreu is hot. A micro backtrack: we had a mental picture of Betsy based on her nasal Michigan-ish voice on the her famous podcast about Lance and doping.

Then we worked the comedy pretty hard about Betsy in our review of the Lance & Lance Show. She then wrote us a charming note saying she got a kick out of the article. Double then, we finally came across a picture of Betsy and Frankie. So Twisted Spoke is now a Betsy fan. She sassy!

8    Speaking of Lance, he has a new Honey Stinger waffle product he is excited about. TS couldn’t help but make the immediate cynical joke because it seemed so damned obvious. A lot of people in the Landis investigation are waffling about their testimony — soon, perhaps, even the Boss himself. Honey Stinger? Sting operation? Waffling witnesses? Hmmm….

9    Vino is making a movie, baby. While rumors persist that the Sony Armstrong movie is sitting in a storage vault in Hollywood waiting for the Landis story to blow up or blow over, Vino is ready to rock the silver screen. This deserves an entire blog post but the basics are that Vino plays a professional cyclist. Which is good because Vino doesn’t have the acting chops to play a professional bowler.

10    Simon Gerrans of Team Sky is mad about Floyd Landis coming to speak at an anti-doping conference in Geelong while the World Championships are going on. However he said that it’s okay for Dr. Ferrari to show up with his famous orange juice.

Seriously, TS fully understands that riders, directors and managers are weary of the whole dope thing. A big event like the Worlds should not be overshadowed by doping. But the more the story is out in the open, the sooner solutions happen. Gerrans is pals with Armstrong and is down for a few cases of the Honey Stinger Waffles but we say, shut yer yap and ride. Let Floyd worry about Floyd.