I’m a freak and I ride freak bikes. At this point in my life, I’m just going to admit the oddity of my dimensions and the horrible effect they have on the esthetics of any bike frame.

I’m 6′ 4″, 200 pounds with long arms and legs. Built like a pro basketball player and you know how out of proportion their bikes are. All my rigs are custom, and as hard as I try to normalize the frame dimensions by insisting to fitters that I can contort my body and compromise my position, the end result is always the same: freak show.

I ride an XXL Trek Fuel 8 29er that doesn’t really fit me. My seat post is super high and I’m bent way down over the handlebars. Weight distribution is far from ideal but I couldn’t afford a custom full suspension frame so I just live with the ergonomic consequences. It’s a fantastic bike that never had me on the drawing board.

I spent several hours and had many phone conversations when I was sized up for my Calfee Manta carbon frame. One of the main reasons I went with the Calfee is the oversize carbon tubes. It goes a long way, visually, to making the proportions looks normal.

I promised to do lots of back stretching and strengthening exercises so I could have a normal looking stem with a minimal amount of rise. We tweaked the tube angles and lengths so my seat tube wasn’t sticking way up in the sky. I paid two grand for a 40mm depth carbon wheel-set — again, for proportional improvement — so people would stare at me less. 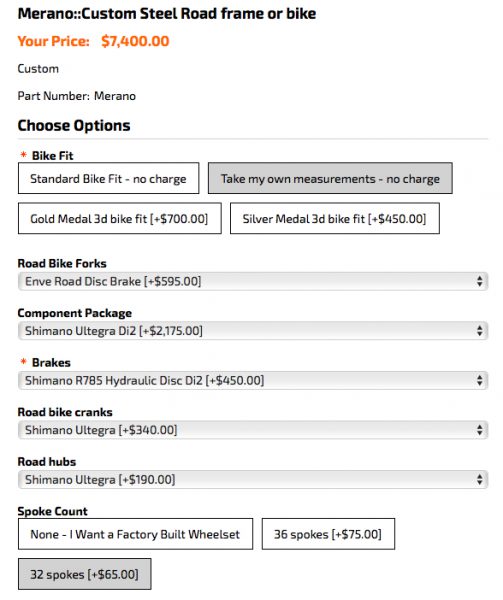 That all worked out pretty well for me and the Manta. I love that bike and it looks less freaky than any other bike I’ve owed. That said, at the end of the day, I’m still a freak. Swinging my leg over a road bike is the only time I ever wish I was average height with average length arms and legs. I’d look so much better spinning those pedals.

Being a physical anomaly, I’m always on the lookout for other bikes designed for big guys that don’t look like freak machines. Believe me, there aren’t many out there to be had.

That’s why I was excited to stumble on the Zinn Merano ST. Now, Leonard Zinn is about 6′ 8″ and knows more about designing big man bikes than probably anybody on the planet. That’s all he makes and he’s done it a long, long time. He makes custom 200mm cranks, he does special steams, he builds just for monsters and giants.

Now in my book, he makes some awesome bikes but there isn’t the pure artistry that Craig Calfee puts into his bikes. Calfee started out in art school as a sculptor and his frames reflect that refined sense of form, texture and color. The Calfee Manta and his high-end bamboo bikes deserve gallery space.

So it was quite a surprise to breeze into the Zinn website and discover the Merano ST built up with a carbon wheel set, Enve fork and slick white paint job with red bar-tape and seat. It’s the sexiest thing Zinn has every done by far — although I’m still not much on his logo.

I went thru his order menu and selections for the build and came up with a price tag over $7000. Yes, expensive but it’s first class components and Di2 — put it all together and you have a sweet steel custom bike designed for freaks to go very fast.

Definitely worth a closer look if, like me, you’re a stranger forced to live in a world of small production bikes.