Winter in late Spring. A white-out Tour of California.

Winter in late Spring. A white-out Tour of California.

Snow is good news up in Lake Tahoe, an impossibly beautiful and crystal clear lake ringed by the Sierra mountains.

Snow means great skiing for those coming in from Reno and the San Francisco bay area and major tourist dollars for this resort destination. Snow is happiness and health and prosperity and fun.

But not snow the middle of May, not during the Tour of California. Snow is a disaster, a financial failure and a huge disappointment. Stage one was first cut nearly in half, then cancelled with two minutes to go, riders on the line, locked and loaded and shivering. 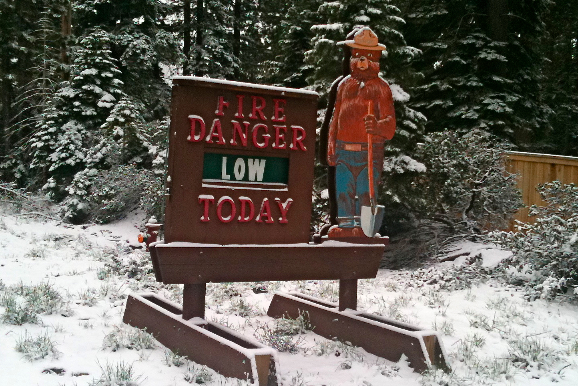 It was the right call and nobody in the peloton argued. Levi Leipheimer apologized to a sparse and frozen crowd that quickly ran into the casinos to warm up. Riders headed back to the hotel for some roller time as teams debated the shifting logistics and worse-case scenarios. There wasn’t race stress, there was the non-race kind.

Most team managers knew Sunday afternoon that a Monday start up in Northstar was highly unlikely given the continuing snowfall. Roads were only going to get worse. Riders hung out in their track suits and ran out into the snow for quick photos. A Radio Shack team member chased another guy into the lobby, snowball in hand.

So it was no great shocker this morning to learn stage two had been moved to Nevada City, a drop down in elevation of roughly 3000 feet. This was the Hell of North Lake Tahoe and it was time to evacuate. From Nevada City, it’s an easy snow-free ride to the flats of Sacramento.

We drove the West side of the lake on highway 28 after the stage one cancellation and it was a Winter Wonderland. The small climbs around the lake were covered in snow and even our all-wheel Subaru slid on the descent. We spent half the drive creeping nervously along at 15mph. 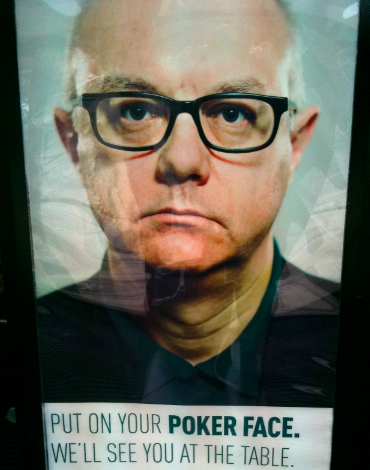 Casino poster that capured the mood after cancellation.

No joke: we had the ipod on music shuffle and still had forgotten to remove all the Christmas music. We drove, hands gripping the wheel tight and riding the brakes, “Rudolf the Red Nosed Reindeer ” started playing. Even the ipod knew the folly of a bike race in the snow. A Nevada City start was a given.

What’s all this mean for the Tour of California? As a money making venture, not good. As the Inner Ring pointed out, the race still isn’t in the black and they just lost two days of tourist income and the chance to show off one of the most beautiful parts of California. It’s hard to assess that impact but it’s an accountant downer for the bottom line. Local tourism officials had hoped the race would bring in as much as $3 million — yeah, in winter gloves and hats, maybe.

The interesting angle is what effects the snow will have on the outcome of the race. As Mike Tamayo of the UnitedHealthcare squad told me, the weather puts all kinds of stress on team logistics and the mental state of riders. Teams that have their planning down, that are organized enough and flexible enough to deal with the curve balls will fare better than teams that don’t.

The trick is to keep the riders focused on the race, not worrying about hotel changes, unpredictable schedules and altered race routes. Again, teams that are good at rolling with the punches and problem solving on the fly have the advantage.

Any of that organizational stress that gets passed on to riders is a negative. They need to be in race mode, not “what-the-Hell-is-going on?” mode.

The Giro d’Italia handled the tragic death of Wouter Weylandt with skill and class and quickly got back on track. Two days of snow have thrown the entire Tour of California far off course.

The people behind the TOC are agressive and pro-active — so let’s hope there are sunnier days ahead.