It’s a slow time of the year for cycling. Without the re-testing of old blood samples and Lance Armstrong’s latest tweets there’d be nothing for Twisted Spoke to chew on. We’d be forced to start reviewing crank arms and chamois padding.

So in these downtimes, a cycling journalists’ thoughts naturally turn to sex. Which brings us immediately to Willow Koerber’s legs. She’s hot, she’s fast, she merchandizes her butt off.

Good for her — we’re waiting for the Maxim photo-shoot, the sexy calendar, her dating some Twilight dude. That’s just the way the progression goes.

Back in the day, my day, female athletes weren’t allowed to monetize their physical assets. No selling the booty, no making megabucks off the lusciously toned body sculpture. As a culture, we just weren’t there yet and it was our loss, as usual.

Even fifteen years back, women were so happy to finally be taken seriously as professional athletes and have decent prize money that it never occured to most of them to take the jersey off, slip into some lingerie and make even more money. It would have been considered tacky to work that thong.

Sporn is everywhere we look. Volleyball babe Gabby Reese was on every sports magazine cover in the universe. Dana Patrick leans over a car door in a black latex bikini. Even javelin throwers are in on the act with Leryn Franco and her falling lingerie. Ravishing boxer Laila Ali in her boxers giving you the come-hither, let’s go 12 rounds look. Which if you must know, is a good look, maybe the best. 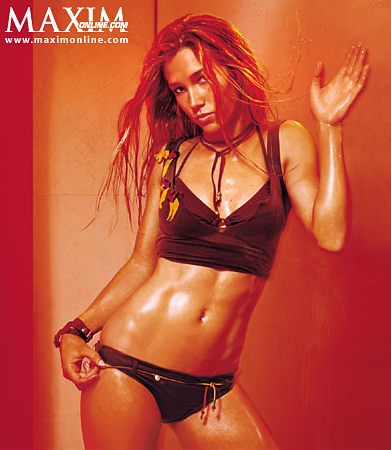 Swimmer Amanda Beard tugging her briefs down, looking at you with the sex zombie eyes. Golfer Natalie Gulbis bending over in white panties and high heels to, gosh, straighten that crooked golf tee.

Pro mountain biker Niki Gudex sweating it up in a leather bikini. Tennis player Ana Ivanovic can barely keep her clothes on and is all over the internet.

Track cyclist Victoria Pendelton, gets the full airbrush make-over and looks fabulous in miniskirt and black hose. We are in the golden age of sporn. A veritable spornapalooza.

Nobody feels bad about the arrangement except Russian female weightlifters in the heavy weight division. And believe me, they’re dieting right now, hoping to make the Sassy Soviets Weightlifter calendar. Even fat Russians understand the benefits of sporn. 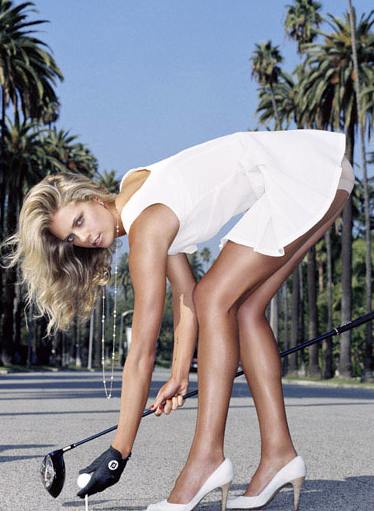 No, honey,  they’re finely tuned athletes that embody the highest sporting values who just happen to look fantasic in a wet t-shirt, thong, stiletto heels and/or bondage gear. Now pass me my issue of Maxim, will ya? There’s a great essay on this Brazilian pole vaulter. Hot damn.

Sports like swimming, beach volleyball and ice skating are just bikini contests with a competition thrown in for fun.  The podium is the new runway and a gold medal means don’t bother with the Wheaties cereal box, FMH magazine is calling about a tasteful photo shoot with a boa constrictor and body paint.

Which brings us back to Willow Koerber’s luscious legs and a big apology to Willow Koerber, if needed. She’s a tremendous athlete, she’s paid her training dues and deserves every dollar. Totally up to her how she super-sizes the benjamins. We thank her for the nekkid shot on her website.

We’ll just enjoy the photo spreads until the bike racing starts again in February or March. Then we can start talking about Paris-Roubaix or the Tour of Flanders and rain and mud and Belgian hardmen ripping across the cobblestones and leave all this infantile and childish sporn behind. 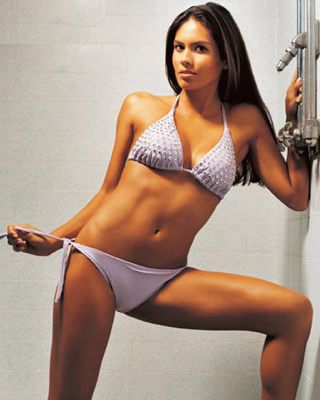 But in the meantime, we’ll just content ourselves with a steady dose of sporn. Did you see  Lokelani in the bikini in the shower with the symbolically shaped shower head?

Did you catch Olympic gold medal volleyball player Misty May in Maxim? Why no spike heels — get it– spikes? Don’t tell me you somehow missed swimmer Haley Cope topless in Playboy? What do you do all day, for God-sakes?

There will be no excuses if you haven’t sneaked a peak at sporn super babe tennis player Ana Kournikova. Speed skater hottie Anni Friesinger topless on the couch waiting for you to bring the shot of Jagermeister? Don’t you have a subscription to Maxim or FMH?