Tour de France director Christian Prudhoome has a new toy and he’s having a great time playing with it: the Voges.

The mountain range in Eastern France near the German border allows Prudhoome a creative freedom that’s not always permitted in the traditional and time-honored Alps and Pyrenees. The Voges is fresh clay to be molded and an place to experiment and shake the race up.

The Alps and Pyrenees often have a set battle plan established over any years and there’s a predictability to how those mountain climbs are raced.

The big teams with top GC contenders set a hard pace over the proceeding summits, then throw their two mountain domestiques to the front to drive the pace up the final torture test while the leaders wait to attack in the final kilometer or two.

Sometimes that slow-building tension makes for gripping theater and sometimes events unfold with the usual suspects doing the usual things. It ain’t the crazy Helta Skelta Vuelta that’s harder to control or the creativity of the Giro d’Italia. The Tour de France can be constrained by its long history and expectations — the repetitive use of Ventoux, Alpe d’Huez, etc. It’s a feast but you generally know the menu pretty well. 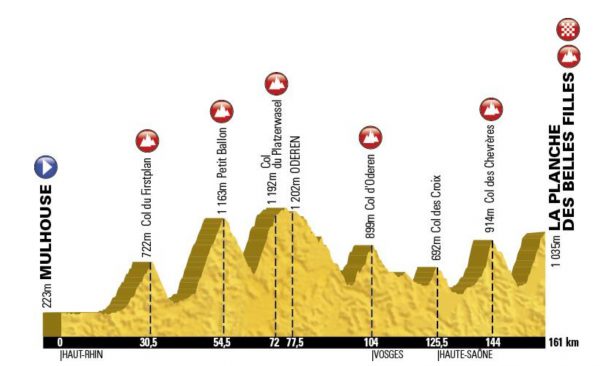 So Prudhomme has done a clever thing: he can’t truly create anything too surprising or bold in the worked-over territory of the Alps and Pyrenees mountains so he leaves those gems intact and finds a third mountain range — the Vosges.

That is where he can throw in those middle mountain race routes that confuse the riders and open up the improvisational spaces and unpredictable tactics. The rediscovery of the Voges and those stage possibilities bring a freshness to the Tour.

So we’re looking forward to stage 10 on July 14th, Bastille Day, that runs from Mulhouse to Planche des Belles Filles. This is the kind of day that an Alberto Contador might spring an attack like he did on the crosswindy roads to Saint-Amand-Montrond in the 2013 Tour. He cut over a minute into the lead of eventual winner Chris Froome and that stage had everyone bubbling with excitement — would El Pistolero deliver a stunning come-from-behind win against the Sky juggernaut?

The middle mountains confuse because of that choice in scale: not really the insane grades of the Alps and Pyrenees but nothing to sneeze at. The Voges bring a volatility because riders aren’t quite sure where and when or if the attacks are coming like the more set strategy in the high moutons.

Bring on the Voges and the delightfully misleading Planche des Belles Filles.