Thomas Voeckler is no Edith Piaf.

Her famous song “Je ne regrette rien” is not the tune that Voeckler is wistfully humming. He just came out in the press and admitted he does have regrets about missing the podium in this year’s Tour de France.

Although he spent ten magic days in yellow, up and down the Pyrenees and into the Alps, he finally blew his chances on the mythic Alpe d’Huez. Tactical errors on that final mountain stage left him in fourth place.

“With a clear head, I’d say that I lost second place at the Tour on the Col du Galibier. I shouldn’t have tried to follow Alberto Contador and Andy Schleck at all costs,” he said. “If I had finished in the same time as Cadel Evans… But I lacked clarity. My directeur sportif should have ordered me to stop. It was an error, but that’s how it was.”

What’s funny is that sharp and tactical Chris Horner told me almost the almost the exact thing yesterday in San Diego. According to Horner, everybody except Pierre Rolland screwed up that stage. He said that Voeckler’s DS should have been shouting in the man’s earpiece — “No, no, no — stop, what are you doing?” It took him four months but now Voeckler agrees with the American rider for RadioShack-Nissan Trek.

With the French public wildly enthusiastic and willing him to victory, Voeckler started to think the podium was a possibility.  “I never believed in Tour victory,” Voeckler told L’Équipe. “That’s not a bluff, but I did seriously believe in the podium. After Plateau de Beille, I said to myself that there was no reason why I lose more ground in the mountains.”

He did lose ground and that included that stop on the third step in Paris. Voeckler made the ill-advised move to chase Alberto Contador by himself after the Spaniard attacked on the Col du Télégraphe. Monumentally bad idea but loaded with panache. He finally have up after the Col du Galibier and waited for the Europcar teammates, then lost the maillot jaune on Alpe d’Huez. 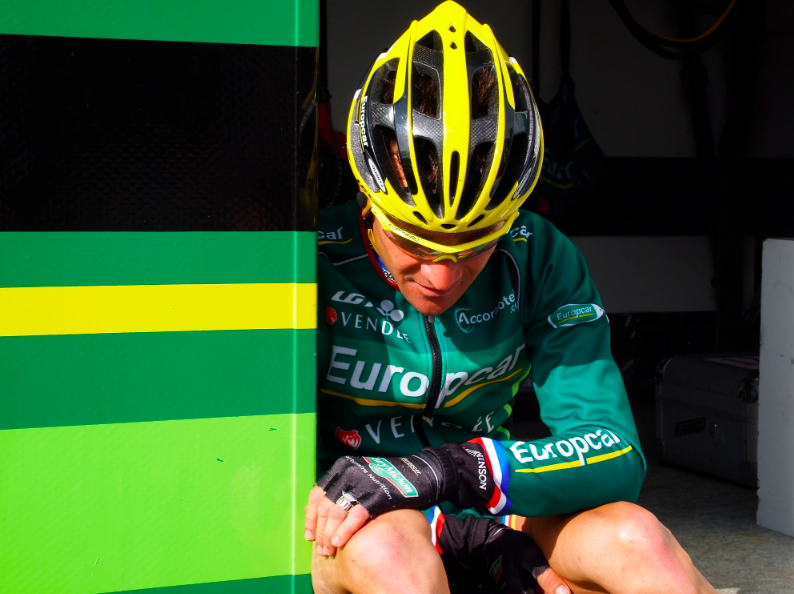 Horner watched the stage on TV at home in Bend, Oregon after his nasty crash in stage seven. That would knock him out of the race but he still rode to the finish line with a concussion, a broken nose, some broken ribs and severe bruising. Doctors later discovered a blood clot on his lung. Given the excruciating pain of the blood clot,  it’s unlikely that Horner was shouting at the TV when Voeckler made his disastrous move.

We’ll always remember that afternoon because we had the good fortune to see Voeckler ten minutes after the stage and those photos were some of the best we took all tour. He looked crushed and disappointed as he sat on the steps of a Europcar trailer.

Edith Piaf lead a hard life but have few regrets. For his part, Voeckler has at least one. “Today I think I could have done better that day if I’d had more confidence in my potential,” he said. “I didn’t exploit all of the possibilities.”