How to get to the Tour de France from north of San Francisco, California. Simple, if you’re a masochist.

One hour bus to airport, three hour flight to Dallas, two hour lay-over, 10 hours or some such torture to Paris, fly through the night with not one minute of sleep with a center row seat and the longest legs on the plane, land and get rental car for 8 hours drive south to finish town of Saint Flour.

Then hike up 500 stairs to hilltop finishin pittoresque Saint Flour, then haul ass another mile to salle de presse, get press credential, hike back down, shotgun one beer, drive another hour and a half out into the country, with a full body cramp and brain shutting down, to a small hotel just minutes before the restaurant closes at 9:30.

Yeah, it was crazy but my day was nothing compared to the pain inflicted on stage 9 of the Tour de France. Let’s just call it le tour de l’hopital.

Sure, last year had some significant crashes but this edition is pure mayhem, concussion chaos, a sad and cruel reminder that this is a sport that wipes out an entire year of hope and sacrifice and blood and sweat because some yahoo crashes in front of you and take you down. Or the roads are too freakin’ narrow or the wind is fate itself or everyone in the peloton is having a heart attack or maybe it’s just plain homicide — the media cars and motorbikes are part of a death squad. 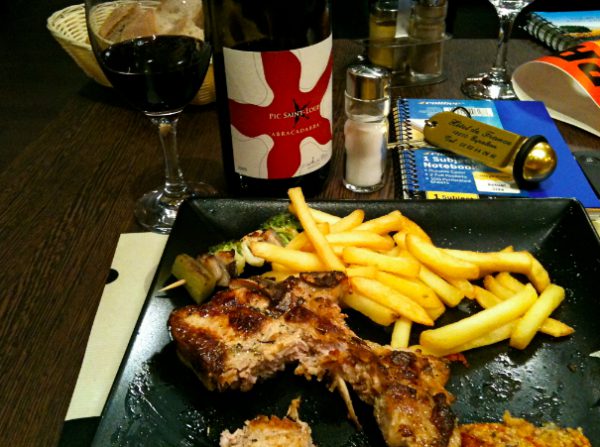 A miracle occurred today and we haven’t even gotten to that bizarre, Dickens Catholic pilgrimage site by the name of Lourdes yet. A Euro Media car almost killed Juan Antonio Flecha (Sky) with the kind of contract hit you only see in the mafia. Sudden jerk of wheel, Flecha doing the body pinwheel and taking out Johnny Hoogerland. Is this a revenge scenario — did Flecha not pay his loan shack or give the mob boss’ wife a case of herpes?

When we arrived in Saint Flour after the stage, exhausted, drained, slimed with travel sweat, we walked into the Salle de press and the first two journalists we saw said this day was a scary disaster. James Raia said he drove the last 100k of the race route and the whole time was thinking, uhh, this is wet and foggy and dangerous. Something bad is gonna happen.

The we saw CycleSport magazine writer Ed Pickering and the first words out of his mouth were “they’re going to take some heat for this one” — meaning the Vino fly through the air, break leg routine and the media car hit job. And maybe all those cool and clever uphill finishes that had everybody panicked about riding at the front.

It’s a strange year for the Giro and Tour de France. Wouter Weylandt dies in the Giro and race organizer Angelo Zomegnan spends half the race dismisses rider concerns about safety. He may or may not lose his job over an assasins Giro that nobody has recovered from just yet. Tour patron Christian Prudehomme must be feeling Zomegnan’s pain right about now.

Still, the scenery is nice, no argument there. And take it from me, that 18 euro bottle of red was just what I needed to survive 24 hours of travel hell. I took the last glass up to the room to help fuel the discourse.

The irony is that Mr Crash himself, Garmin-Cervelo’s Christian Vande Velde is still in the race, his body in one functioning piece. He’s probably hit a fire hydrant while out on a rest day spin.

Everybody from Jonathan Vaughters on down gives the same timeless verbal shrug of the shoulders: That’s bike racing. I don’t know, is it?