Yes, we are naked.

Some people aren’t much on the understated new Team Sky jersey. Some think the new Radio Shack “thousand R logos” jersey is an abomination.

The latest version of Astana’s new kit met with a deafening silence. But for Twisted Spoke, the true horror, the fashion disaster, the incomprehensible lapse of all taste and judgement is the new Footon-Servetto design.

Since the jersey is basically flesh colored, the rider wearing this crime against cycling appears to be naked except for the massive black footprint of some giant crushed into his chest. 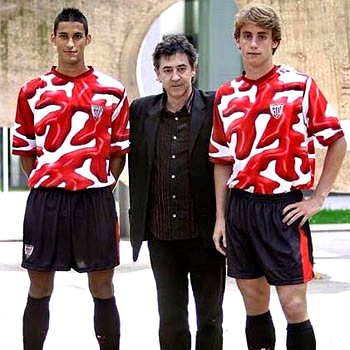 Imagine fielding an entire team that looks like it’s already been squashed. You’re not exactly building a winner’s mentality there. “I’m naked, I’ve been crushed, I’m sponsored by a rickety fold out bed.” Yikes-arama.

A designer named ﻿﻿Dario Urzay is responsible and we hope this was done for Footon Servetto as a freebie with no money changing hands.

Dario is obviously somebody’s cousin who “likes to sketch” or is doing this in trade for a set of aero rims. Whatever the case, he should be stopped immediately.

Ahh, but we dig deeper into the bold and scary fashion world of Dario. A wiki search turned up a second winner — world’s ugliest soccer jersey. Every artist needs a niche, a speciality, a sound-bite encapsulation the media can latch on to. F0r Dario, it’s freaky sportswear. we’re all for artistic expression but seriously, do not let this man near another athletic team of any kind. The consequences are simply to dire.

Footon-Servetto risks being the first team with a rider breaking his contract out of embarrassment. Don’t be surprised if Footon guys wear their rain capes when it’s 80 degrees and sunny.

But that’s our personal winner for ugliest kit in professional cyling. What’s yours?