Neutral support camel out of operation.

Strange doings down in the desert, the Land of Q, the Arabian cycling hotbed that is Qatar. Some people call Qatar the Italy of the Arabian peninsula. Some, not the majority.

First, Belgian classic specialist Tom Boonen of Quick Step disguised himself in an arab headdress and long flowing white robe, then borrowed a local bike to pre-ride the course. The droves of paparazzi in Q were disappointed.

Then, in the hotly contested (hey, it’s the Middle East) stage one team time trial, Team Cervelo was hit with a one minute penalty after Heinrich Haussler pushed teammate Gabriel Rasch. At least according to judge Jinshan Zhao of China.

First Qatar question; what is a judge from China doing in Qatar making calls on a ProTour race. This is sort of like the Jamaican judge calling the shots in a Scandinavian cross country ski championship. Sure, it’s a global sport but silly, too.

Strangely enough Chief judge Enrique Gonzalez Martinez agreed with Zhao and despite the short distance of the stage, enforced the International Cycling Union (UCI) rule which mandates a one-minute penalty for pushing. Which is pretty much goodbye for Cervelo in the overall unless they push back really hard. 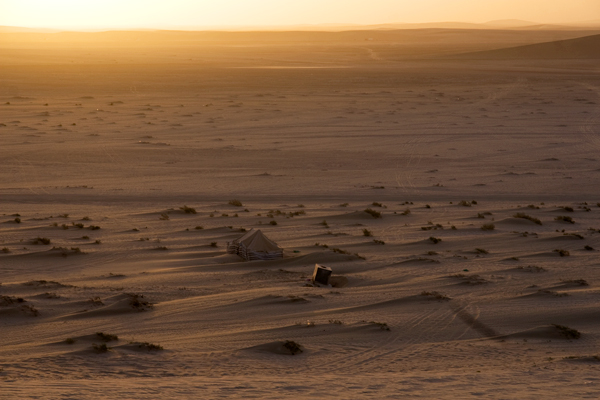 Wait, is this on the race route?

Then things got even stranger in Qatar, which like Nim’s Island or the parallel universe of The Golden Compass, is always unpredictable. Stage two began on a camel racetrack and that’s where the trouble begin. Several teams complained when the neutral service camel carrying the spare wheels decided to take a nap and refused to move despite a vigorous beating.

Then Geert Steurs (Topsport Vlaanderen) and Wouter Mol (Vacansoleil) attacked just two kilometers into the race, leaving everyone in their dust. Literally. Halfway through the course, the road disappeared into a sand dune. The peloton came to screeching half as an army of dust blowers cleared the road. But by then, it was too late as Steurs took the win. The tour of Q is Quazy.