One, Alessadro Petacchi (Lampre) won the 153 kilometer stage from Cambrai to the cathedral city of Reims.

Three, Fabian Cancellara, the Swiss time trial champion, holds on to his yellow jersey and all the ladies are excited.

Four, Monsieur Jerome Pineau of Quick Step is the best grimpeur, which is French for tiny guy who goes up the mountains fast. He’s in polka dots although what red dots have to do with rocketing uphill is a mystery — but not the one we need solved by the UCI or French police immediately.

Who’s the Lampre guy in the white jersey trying to pick-up Laura Antoine, America’s podium girl sweetheart? (Not to mention the fact that Laura happens to be married.) Because it’s not Thomas Geraint of Team Sky, the legitimate owner of the jersey. 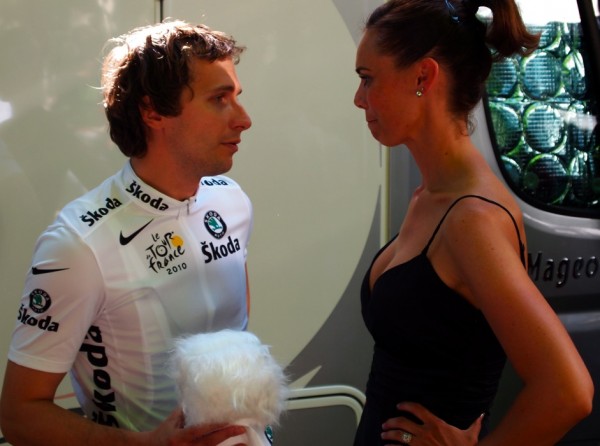 Who is this fake white jersey guy?

Minutes after the presentation of all the jersey winners, I walked behind stage to this strange scene and it was part reality show gone wrong and part silent comedy gone perfect.

The man in the faux white jersey spent 15 minutes in intimate conversation with Antoine while she went through a range of facial expressions: shocked, insulted, confused, surprised, annoyed etc etc.

I don’t know what the Lampre ladies man had in mind. Maybe he just wanted Laura to kiss the little white stuffed yeti. Perhaps he had specific needs or desires that we should try not to imagine.  All I know is a crowd gathered round for the show.

Finally, she succeeded in shooing him away with help from co-workers. Still, the stage four mystery remains — who is he?

When I showed his photo in the press room to Andy Hood of Velonews, two Italian journalists, an American and Belgian writer, nobody could identify him.

So the mystery is yet to be solved: who the hell is the Lampre guy in the white jersey?

Note: For all the cool pics I got from the last few stages, check out the TS Flickr gallery right, about, here.