What’s a Tour de France without the presence of the Devil? Dieter “Didi” Senft has been shaking his trident at the Tour and Giro since 1993.

We finally got our own look up close and personal in the 2010 Tour. The Devil has some personal hygiene issues so it’s just another reason not to go to Hell. His feet are filthy and the costume definitely has too much mileage on it.

It turns out the this devil is hardly one-dimensional. He’s an inventor, bike designer, museum curator and even an occasional Santa. D0 not miss his Michael Jackson tribute bike. There’s a great interview with him at Pez.

We look forward too seeing his playfully demonic face in the Alps and Pyrenees. Vive Le Tour! Vive Le Diable! 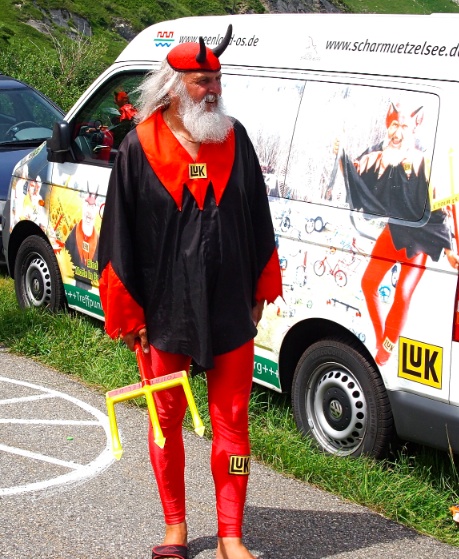 Devil with down time.