The road to Gap was where Joseba Beloki had his terrible, career ending crash.

So far the 2010 edition of the Tour de France has been a crash-filled demolition derby. In the slippery wet descent of stage two Andy Schleck went down and Tyler Farrar fractured his wrist. Andy’s brother Frank hit the cobblestones hard in stage three, his tour terminated.

In the mountains Cadel Evans and Lance Armstrong both saw their tour hopes come to a painful end. A high speed spill at 60kph for the seven time tour winner and a fractured elbow for Evans — continuing his terrible run of grand tour luck.

Jonathan Vaughters had a wonderful way of describing a crash. He said it’s like being thrown out of a car at 50 miles an hour in your underwear. Just thinking about that kind of impact makes you want to double-check your health insurance. 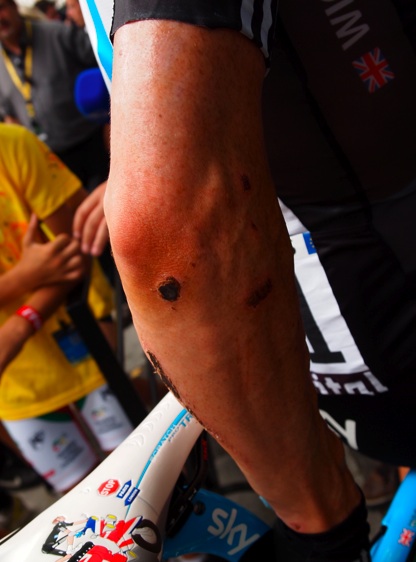 The casual racing fan in the United States has no idea the degree to which riders are banged up in the tour. Nor do they fully understand how the extreme level of mental toughness to survive all the way to Paris. Something about tight, bright lycra fools people into thinking these guys are actually ballet dancers.

The tour medical report is impressive in length and range of injuries, just about everything you can break riding a bike. The constant mental stress also wear riders down, creating those moments of inattention that lead to disaster.

At the start of each day you see the two-wheeled version of the walking wounded. I saw Bradley Wiggins up close just moments before the start. He’s had his share of crashes — like everyone else — and his legs and arms are scarred with old and new wounds. There are plenty of riders who look like Wiggins.