The Radio Shack team bike. How many R's are too many R's?

Home/Armstrong, Humor, Radio Shack/The Radio Shack team bike. How many R's are too many R's?

The Radio Shack team bike. How many R's are too many R's?

How many R’s can one advertiser put on one bike?

A step back for a moment. Twisted Spoke mastered the art of obnoxious branding over a 20 year career in advertising, working on everything from Bank of America to tourism campaigns for the state of California, from popcorn, Mexican salsa, cars and computers to beer and toilet bowl cleaners. We know branding in all its insidious forms — and we’ve done most of them personally.

Jesus, the new Radio Shack bike is a rolling billboard, a crass abomination. People will love it, no doubt. One of the many things that the European cycling world learns from the states is not just how to train seriously to win seven Tour de Frances in a row but also how to merchandise the crap out of every marketing opportunity no matter how small. Did you see the R underneath the top of the seat stays? 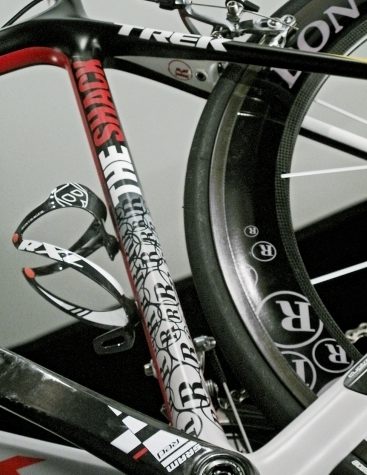 Twisted Spoke remembers standing on the Champs Elysees in Paris in 2003 or 2004 waiting for Mr Yellow to roll by. We were looking around for souvenirs for our young son and assuming, as any American at a Major Sporting Event would, that everywhere we turned someone would be hawking disposable priceless commemorative garbage. Not so. Pas de plastic crap.

Which is a long winded way of saying Radio Shack doesn’t see things the euro way. Bigger R’s, more R’s, can we get another ten on the seat tube, have we maximized our sales opportunities on the seat stays? Marketing thinks we can cram another dozen R’s on the crank arms and handlebars. Check with Trek — see if they can super-size the bikes — we need more R real estate.

We counted over 24 R’s on a single tube and another 8 R’s on the inside of the fork,  plus monster Helvetica type proclaiming The Shack Brand. We’re guessing there are close to 100 R’s on the entire frame. You would never think the bike was built by Trek but rather a new company with a one letter name. R-D-Har-har.

Me, I’m in the latter category.