The Geox-TMC Kit. The other shoe drops on Menchov.

The Geox-TMC Kit. The other shoe drops on Menchov.

Do you feel bad for Denis Menchov? Can you understand his agony?

First, he signs for Geox-TMC only to discover they don’t get a ProTeam license and an invite to the Tour de France — even though he was third last year and Spanish roadblock Alberto Contador is taking a meat-induced vacation.

Then adding insult to injury, the Russian is forced to wear an outlandish Geox kit featuring a large black dress shoe with kooky air jets coming off the sole bottom. Danilo di Luca plans to ride for Katusha for free but at least he’s not embarrassed to slip on his jersey.

And yet, Denis Menchov still isn’t ready to walk. It takes plenty to irritate this man. If Twisted Spoke was a rider agent, we’d put an exit clause in the contract if our rider found the team kit too ugly to wear. No professional should have to ride around Europe with a dress shoe on their chest. 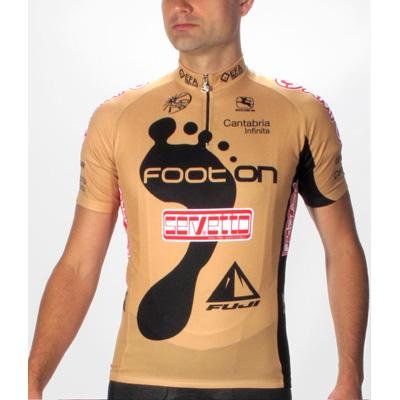 Cycling fans survived the hideous Footon-Servetto giant black foot and you could argue this is an improvement of sorts. Now the giant foot is inside a giant shoe. That’s a thoughtful evolution and does keep the odors down.

The kit was designed by Diadora but really nobody should be taking credit for this.

Team manager Mauro Gianetti is now responsible for two of the ugliest team kits in recent history. No wonder they didn’t get a Tour invite — the French appreciate a certain level of style and a giant shoe tramples on their sense of good taste.

The UCI likes to legislate things and in this case, we do wonder: should there be some kind of review board in cases of extreme and flagrant disregard of design principles? Pat McQuaid, please step in and fix this thing, willya?