Vincenzo Nibali calibrated his efforts to perfection in the 179.4k stage from  Gijon to Alto de Cortobello. Sadly for the Liquigas rider, the stage is actually two kilometers longer than that and the so-called Shark stopped swimming.

Until that miscalculation, Nibali had the Vuelta well in hand. Frank Schleck was up the road gaining time but not enough to panic. Top GC threats Joaquin Rodriguez (Katusha) and Ezequiel Mosquera (Xacobeo Galicia) were tucked safely behind Nibali as teammate Roman Kreuziger set a hard but steady pace.

Sporting the berry red leaders jersey and lime shorts, Nibali looked like two scoops of sherbet: very cool and confident. That’s when the dead-in-the-water thing happened. Which was pretty obvious to Mosquera and Robriquz, who quickly rocketed away, driving two whaling harpoons into the Shark — to work the analogy for all its worth.

It’s the Helta Sheklta Vuelta and nobody controls this krazy race. While those attacks were happening, skinny basque climber Mikel Nieve of Euskaltel-Euskadi crossed the line in first for his first grand tour stage win. The always sober Frank Schleck boosted himself up into podium contention by coming in second, 1:06 minutes down.

If Andy had been pacing Frank instead of a game but exhausted Tom Danielson, Frank would have won the stage and gained an extra minute. Somewhere in Luxembourg Andy is deep in beer remorse. 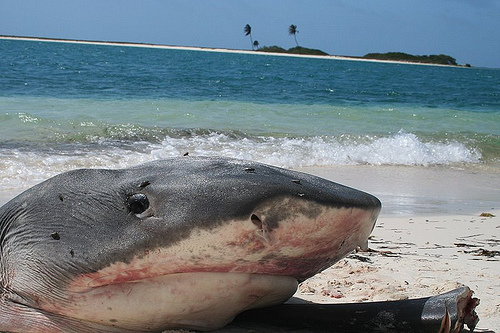 Sprinting to the finish, Joaquin Rodriguez (Katusha) succeeded in stealing back the leader’s red jersey and leadership of the Vuelta. Nice work by the Spaniard who seems to ride in bursts, up and down.

Americano Update: A huge day for Tom Danielson (Garmin Big Transitions) who was the only rider able to grab onto Schleck’s wheel and hang for a while. Danielson even put in a few digs himself, showing the confidence of a guy who thinks he’s a lock for the top ten. At 7th, he’s three better than that right now.  Nice work by Christian Vande Velde in a fine supporting role.

Tejay Van Garderen hit the wall, figuratively, and dropped way down to 30th. It’s his first grand tour and nada pressure on the young HTC-Columbia rider. He’s just taking the advanced three week course in grand tour riding and turning in all homework, A+ for effort and pedalmanship.

Radio Shack Update: It was another “jour sans” for the entire Shack squad, a “day without.” Even veteran cycling pundits are at a loss to explain the complete lack of results for Radio Shack. Vuelta officials are so angered by the non-performance, that they have refused to even list the riders on the finish sheet.