Kiss, yes. But you can't borrow my TT bike.

It’s an orange and yellow day in Rotterdam.

This city is crazy excited. I’d like to think this was occasioned by my arrival in Rotterdam or le depart of the Tour de France prologue tomorrow. No question Twisted Spoke has already had a positive affect on the happiness quotient here. Same goes for that two wheeled shindig Christian Prudhomme organized for tomorrow, something he calls Le Grand Boucle.

Anyway, I was nearly passed out from fatigue after an 11 hour red eye flight from San Francisco to Paris, then an expensive cab ride to le Gard du Nord for the two plus hour train trip to Rotterdam. But I couldn’t sleep despite the exhaustion and a three beer sleeping potion. Drunks were shouting and cheering in the streets below and you don’t need to speak the language to know the translation, “we expletive won, can you expletive believe that, we expletive won.” So much for the catch-up nap.

So instead I rode the time trial course with Fabian Cancellara on the Dutch bikes we rented. Ahh, just kidding, folks. Here was my signature, arrival in Rotterdam moment. I walked out of train station into the hot, sunny and humid city to see at least five hundred bikes parked across the street. Nothing would have been more perfect unless someone handed me a Leffe and a paper cone of frites and some legal hash.

This is bike country and as an American, even from cool, forward-thinking California, you can only shake your head in envy. They know how to live on bikes. The sign above the bikes-for-borrow read “Kiss and Ride.” How can you not love a place like that? Now, Saturday, the pros ain’t kissing each other and there will be no swapping of time trial bikes. But the locals will definitely give you a smooch and a pedal.

And then there’s all the orange shirts — which can only mean one of two things: they celebrate Halloween in July in Rotterdam and the pumpkin carving begins shortly or the Netherlands is playing a major soccer match. The correct answer would be number two. Allez, qui va gagner the maillot orange!

Maybe it’s just my own relentless naiveté and euro-infatuation but why is most any country here cooler than home? As an outsider, there’s always a dopey innocence to life here in Europe. Not dopey as in banned UCI substance but in the charming pace of life. They’re not obsessed with the American traits of trying to do everything faster and cram as much into the day as possible. That’s relaxing and much appreciated after the torture of being 6’4” and flying coach across the ocean. 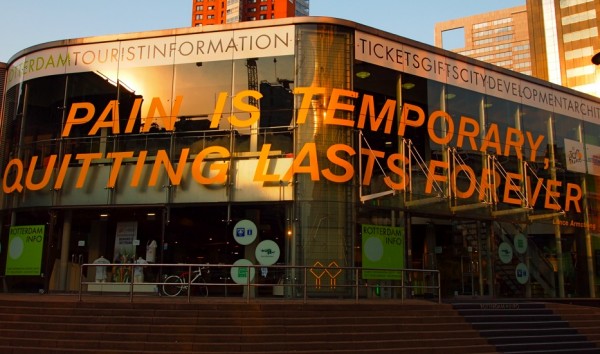 I walked around town and stumbled on the big tourist center with the Lance Armstrong mantra in big yellow letters: “pain is temporary, losing is forever.” We couldn’t help but wonder if he was talking about the three week tour variety or the long, debilitating pain of a bitter, drawn out legal battle over the Landis doping allegations. Temporary could mean years.

Either way, the pain and excitement of the Tour begin tomorrow. The forecast calls for showers so watch out for sliding men in lycra. As old French doper Richard Virenque was fond of saying between lies, “vive le tour!”