We’d conquered the fearsome El Tigre climb to ride victorious into Ensenada. We’d made short work of buckets of tequila and were still standing, our dignity intact and our sexual cravings under control. We’d eaten the magic tacos from our beloved fish taco lady’s street corner cart, ogled the Latin beer girls in their tube tops and go-go boots, we’d eaten well, we’re partied like pros, in a moment of hilarity we’d even bought brass knuckles. We’d had the whole enchilada figuratively speaking.

Now it was time to exit and we were scared shitless. In fact, we were already scared the night before when we hit one last tequila stop — and worthy of an aside. Our trip had been flat out perfect in every respect, so flawless that we didn’t want it to end, the kind of thing where you just keep going, to see how many lucky sevens you roll. After an amazing dinner with astonishing Mexican wine (El Parque, for anyone with a palette) we’d been directed to an outdoor hotel bar.

The cab driver found it after a few miscues and bingo, we’d hit jackpot yet again. As we walked to the outdoor patio, we heard live music playing, a crowd in full party. We were in the zone, basically, we could do no wrong, we were kings, vacation gods, aging but deserving men, but then we noticed a small detail.

Everyone had a name tag dangling from their neck. We’d stumbled into a conference and worse, it was, and I kid you not, a conference of “vegetation scientists.” They got us beers, the women from Australia begged us to stay — hell, they were sick of taking about reforestation in Chile and Arctic grasses — they wanted real conversation — you know, biking stuff, Armstrong, Tour de France, where to buy drugs in Ensenada and did they give discounts at the strip clubs for vegetation scientists — but even after the promise of free tequila we said enough, party over. 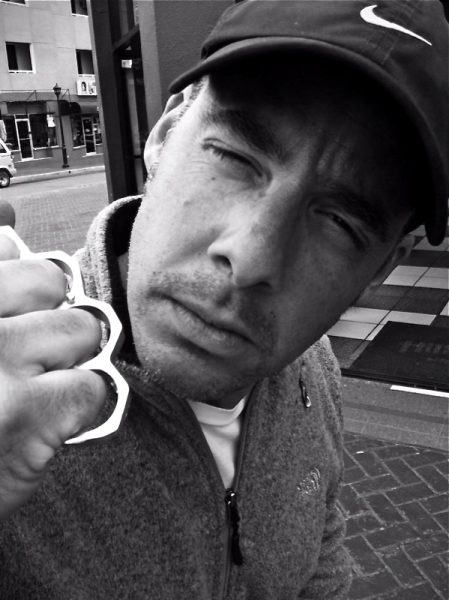 Paul gets ready to cross the border.

Because we were veterans, Paul and I, knew what lay ahead like doom, a Latin reaper, and we’d already planned a 6am wake-up call in hopes of somehow avoiding the Tijuana border crossing hell. And folks, it is hell. Trying to get thru Tijuana to the border crossing without a disastrous mistake and two hour penalty had been impossible. We’d failed three times before.

One time, after numerous wrong turns, we were almost to the runway that inevitably led to freedom when, unaccountably, the heavily armed Mexican motorcycle cop motioned us out of line, the only car chosen, and forced us in another direction toward the Otay Mesa crossing much farther away. You have to remember none of us speak Spanish and signage in Tijuana is a sadistic afterthought –signs do exist but few and far between and it requires a connect-the-distant-dots skill we don’t possess. 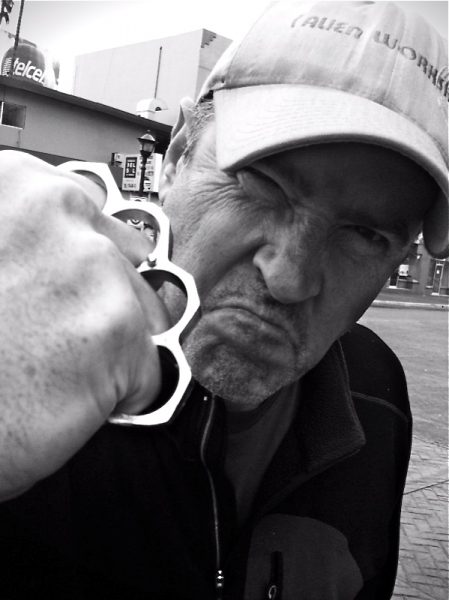 After a maddening series of staggering mistakes, where we found ourselves completely lost — we were reduced to all four of us shouting out the car window at every intersection the imploring question, “San Diego?” and pointing our fingers in all directions hoping for answers. Eventually we got to the other crossing but it took over four hours.

For us, the border crossing had taken on a Dante’s Inferno, Circles of Hell quality. A line of bumper-to-bumper cars that stretched past several horizons, inching forward just enough so you couldn’t use the term “perpetual standstill.” Once time, my friend Adam got so bored and disgusted he got out of the car, walked down an embankment, hiked several blocks and got himself something to eat and drink. He came back and easily found the car. We’d barely moved.

It was then that we were forced by extreme circumstance to invent the Big Gulp Pee Cup. I won’t go into details but we have had to avail ourselves of this personal in-car porta potty on two trips. When we left this year all four of us had out own pee cups. Men don’t share these kinds of things. 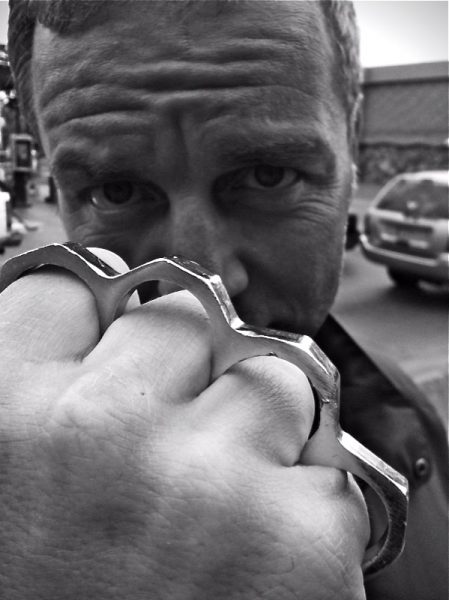 Another year, we though we had a better idea. We’d stay an extra day and go back Monday, see if that was better. Again, the nightmarish scenario played out, a missed turn, followed by a bad guess, followed by a lack of signage, leading to another failure, culminating in yes, the damn rerouting to the Otay Mesa station. Pee cups in usage and swearing like you can’t imagine.

And so we faced the torture-filled gauntlet. Paul and I spoke of these abominations to Doug and Buzz but we knew they couldn’t possibly understand the horrors. They’d never sat in a car for four hours going nowhere or experienced the high intensity stress of driving a rental car in Tijuana demolition derby conditions where you get one chance and one chance only of hitting the right series of exits or you are foully and royally and scatologically begins with F screwed.

Indicator: you know things are life threatening when we turn off the ipod in the car. Once we hit Tijauna it was radio silent, all hands on deck, keep your eyes wide open. Paul was at the wheel and he admitted he was sweating bullets. We repeated each exit and instruction out loud four times amongst ourselves as if simple repetition would improve the odds. Up the hill, down into Tijuana, the Beruit of Mexico, as we paralleled the great Wall of Stay-The-Hell-Out Of-The US. We looked for signage like our lives and bladders depended on it. The focus reached fiendish intensity.

Inevitably, we made our fatal mistake and just as inevitably it came fast, furious and unexpected. We thought we were home free. We fully believed that finally Jesus Christo was smiling on us, paying us back, karma rebalancing. We saw the final, get-out-of-jail card, San Diego, hallelujah and we thought we’d chosen the right lane, cruise control from there. 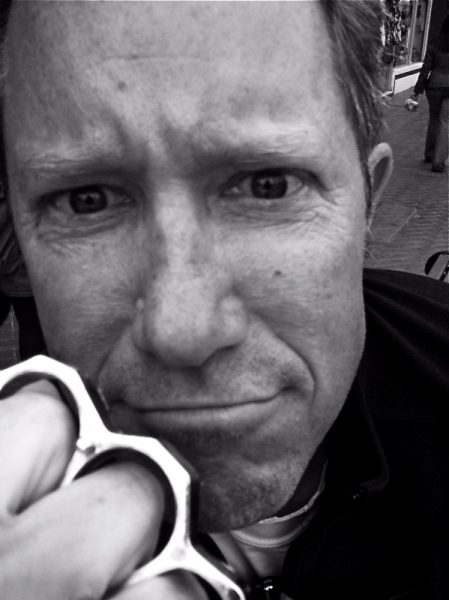 Shit, we weren’t and in 5 seconds we were gonna miss it and be tossed back into hell. At the wheel, Paul went certifiably nuts, defiant, aggressive, slaughter the children nuts. He snapped and the years of border traffic purgatory turned him into an avenging lunatic. We had to get over one lane immediately, in gridlock, across orange posts and yellow tape, under the eyes of armed Mexican police.

This is where Paul won his purple heart or Distinguished Service Cross or whatever we want to call it in Spanish. He screamed out the window, drawing a street person car window washer. In the car, madness, pay the man, where’s money, who has money, cars honking, traffic behind stopped, ready to kill us.

Throwing money at him, Paul, lunging half his body out the car window pleading, “Por Favor, Por Favor” in fury and desolation and hope. In Mexico, nobody lets you in, nobody, a fact proven two miles later on. The homeless person lifting the yellow tape over the top of the car, ramming forward into sweet salvation, the tape almost snagging on the bikes on the trunk rack.

We’d done it, accomplished the impossible, once in four years. We were going home, thru San Diego, at the right border crossing, pee cups empty. A miracle had been visited upon us we would have thanked a dozen saints. We were on freakin’ cloud nine, riding a wave of euphoria that had us laughing and joking and screaming at Machaca — Paul’s Mexican nickname, given for his love of the steak and eggs combo and Ensenada specialty, machaca.

But this is a classic tale of survival and there would still be one last twist before we w’d bring our fabulous Rosarito to Ensenada 50 fun ride adventure to an end. We were five cars from reaching the inspection station and the United States of America. Five cars. We were going to smash all records for border crossing but still it was a long, slow crawl and Paul’s bladder was ready to burst. Hold on, Machaca, we told him, hold on.

In front of us was a beat-up pickup truck with Mexican plates. As I mentioned, nobody lets anyone change lanes, lets anyone in, allows anyone to merge. It’s not a question of fairness or politeness, it’s the iron law of latin machismo. It’s also the reason all kinds of stupid murders happen south of the border. Driving in Mexico is like driving in Italy only the cars are beat to shit.

The final outrage occurred when the driver of the truck made an error: he left a miniscule gap open up in front of the car ahead of him. Shark attacks chum. The guy in the lane to our left, jerks his blue car over, wedging himself just ahead of the truck. Truck man goes ballistic. He pulls right, shoots forward, slams breaks, nearly rams the front of his car into his assailant. It was Saturday cartoonish in its physical extremes.

Now it should be noted that at this very border crossing the week before, a man accelerated toward the border guards for reasons unknown and they opened fire. He’s in the hospital, maybe dead by now. The area is under massive camera surveillance with bomb sniffing dogs, armed officers walking the line and security people carrying mirrors to look under your car.

It’s the last place on earth or at least the dividing line between North and SOuth America, where you want to exhibit aggressive, violent behavior. Just stupid times a thousand. But stupid is what we watched unfold in front of us like some violent el Candid Camera.

Truck man insists on pushing his battered truck (and now we know why) into the blue car just to make a moron’s point. His stupidity and macho attitude earned with a two foot crease in his front door. He won the idiots game and won what? The man in the blue car with a wife and kid and no death wish backs up. It was like watching discovery channel where two rams nearly kill each other for the right to procreate with the trembling female.

However, the upside on all this madness is that Paul is so astonished and stunned by the wrestling match that he’s forgotten his bladder is bursting. We’re now one car away from salvation and what happens? Blue man decides he’s just got to tell the whole loco saga to the border guard lady while a thousand cars are waiting and urine is about to shot all over the car. Will it never end?

We declare a few t-shirts and the guard, seeing the bikes, asks if we won. No, we didn’t’ win but we’d just finally broken the curse of the Tijuana border crossing. We’ll take that win any day.