Now this is the modern cycling couple, in love and sharing everything — the training, the cooking, the doping suspensions.

Riccardo Ricco’s sassy girlfriend Vania Rossi has tested positive for CERA EPO based on a test taken after her second place at the Italian women’s national cyclo-cross championships back on January 10.

If Ricco was labeled a parasite by Mark Cavendish, what does that make the beautiful Vania — Miss Parasite? The sexiest ringworm in Italy? Or should we just stick with the Cobra and the Kitten?

The photogenic Rossi and Ricco are new parents of a baby boy and now, thanks to CONI, the Italian Olympic Committee, she’s officially a stay at home mom. She’s looking at a two year suspension and a significant increase in post-partum depression. Dirty diapers and doping — a messy business.

Things must have been pretty crazy around the Ricco ranch this past year. There those two hyper fit and attractive people are the bathroom juggling vials and syringes. “No, Cobra-honey, that’s my CERA, yours is on the bedside table.” 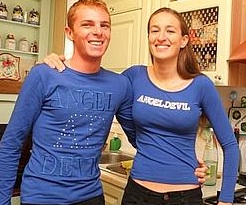 Imagine the nights as they snuggled together in bed engaged in a passionate discussion of masking agents and whether they should splurge and buy a centrifuge. If you’re going to dope, you might as well have a beautiful naked women holding the needle. Ahh, romance.

The one question that comes to mind is, given that Ricco was busted about 20 months ago, you’d think the girlfriend would have taken note and cut back on the secret sauce. The up close and personal view of Ricco’s painful two year suspension apparently had little effect on her own behavior. Love is blind.

And given that she was in a relationship with a known doper and raced herself, that’s the double red flag for UCI testing. We’re going to guess she also failed the IQ test as well. Already she’s throwing out the novel “Breast Feeding Defense, as in, why would I dope when I’m nursing? Well, maybe she wants her son to grow up really, really fast.

It’s going to be another rough two years at the Ricco household for those two love birds. Or love parasites.