Maybe you just didn’t realize there was a war on. The high tech chamois battle being fought by companies like Sugoi, Pearl Izumi, Craft and Assos.

Somehow in your busy routine you missed the latest developments in sculpted, multi-thickness pads, air conditioning channels, vibration dampening zones and yes, the intricacies of the mesh butt vent.

The new Sugoi RSE bib short promises all that and loads more innovation for your gluteus maximus. It’s a high-end bib geared to serious riders doing a good chunk of miles. 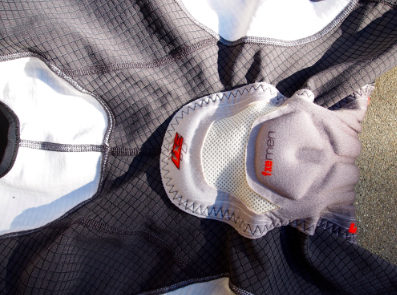 We talked with Sugoi’s head designer Rob Blair about the RSE. The main story is the beautifully contoured and crafted FXE chamois. First off, it’s a mix of open cell and closed cell foam padding.

That immediate feeling of plush comfort is the old school open cell, while Sugoi runs closed cell sections down on either side of the center channel for vibration damping. Nothing better than a happy perineum.

The pad is worthy of some Museum of Modern Chamois award for 3d sculpting. There are three thickness levels which, as you ride, are designed to compress at the same rate. The obvious benefit is the contouring fit but the real advantages are reducing the pressure points and heat spots that lead to chafing. (By the way, with a pad this high quality, you should never need chamois cream unless you’re doing the Race Across America or some such lunacy.

The RSE stays in position, no sliding, rubbing, irritation. According to Blair, you’ll really feel the difference after 60 miles in the saddle. While not naming names, Blair put it this way: “You start getting chafed in spots you didn’t think you’d chafe.” That’s almost as distressing as getting dropped on a climb by an old lady on a pink Schwinn Paramount.

Ventilation is the other talk point for the Sugoi RSE. There are mesh vents front and rear — what we prefer to call the butt vent — and a grooved cut down the center — that work together to bring air in, through and out. (It’s also worth noting that the previous Sugoi RS bib won rave reviews and the RSE is the 2011 upgrade.)

You might be wondering how exactly they test things like pad sculpting, vibration damping and venting ideas. At Sugoi, it’s an extensive process with a half dozen test riders logging 500 to 1000 miles in all weather conditions.

We’ve had the RSE for a month and we’ve been pretty excited by the ride experience. We put in 5 two hour rides here in Northern California plus a long final exam at Levi Leipheimer’s Gran Fondo.

Immediate impressions: the look, feel and finish of the RSE are excellent. It’s the kind of bib that gives you the instant illusion of speed and power just slipping them on. A good feeling.

On the bike, we noticed whenever we hit a pothole or beat-up section of road, the Sugoi felt like it wasn’t sliding around. Every rider knows about reaching down the bib front to make adjustments. The RSE always felt set in position — which speaks to the contoured fit.

We did the 60 mile distance of the Levi’s gran fondo and that was the kind of test where Blair said good chamois dies and the RSE shines. True dat. On the long, nasty climb up from the coast we were able to stick with our buddy who’s 10 years younger.

Near the top we even got out of the saddle for one last defiant acceleration. That doesn’t happen often and we have to think several of the high end features of the RSE were working in our favor. Sugoi calls their system Moisture Acquisition and we’ll call it a definite success. 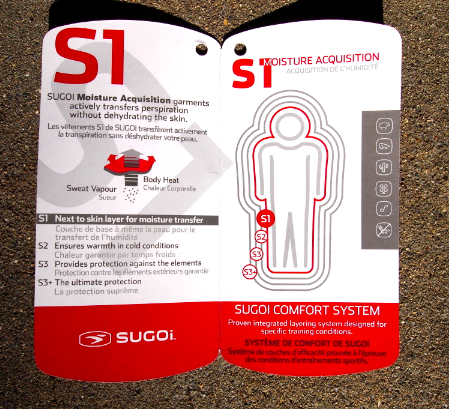 We didn’t cramp up which is also rare on a long, hard ride — at least some of the credit goes to the compression fabric. It’s good to enjoy the beauty of suffering on a bike when you’re not suffering on the saddle.

Interesting word to throw out on group rides: proprioception. Definition: “the ability to sense the position and location and orientation and movement of the body and its parts.” The RSE fabric construction and zig-zag stitching help create that intuitive ability.

The question still up for debate is whether the butt vent exhaust port allowed us to punish riders who were hanging on our rear wheel too long. We’d like to think so.

All in all, we’re highly impressed with the Sugoi RSE bib short. The tag says Sugoi is Japanese for “incredible.” Well, as the French like to say, “chapeau.” Which means nice hat, damn fine job.