Best known for their superb high performance wheel-sets, Mavic launched a line of road lids in 2011. The Plasma SLR is the top of the line, retailing for $225 in the US. We’ve been testing the matte black version — it also comes in Mavic’s signature yellow — for the last month.

Out of the box, the Plasma is a good looking helmet but certainly not ground breaking — it’s a Giro a la Francaise. However the swept-back lines are stylish and the rear section in particularly well-vented. It’s hard to pin down an exact why, but the Plasma sports a more “compact” look than most helmets in the same size. 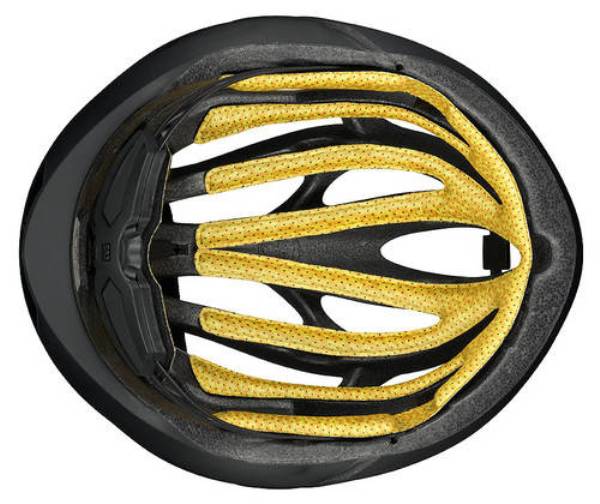 The Mavic rear dial will smoothly ratchet tight with one hand while riding. It clicks when closing down but not in reverse. No complaints here. Mavic claims that cranial mapping has optimized fit and minimized pressure points. Generally, the world falls into two camps — a Giro fit that favors a narrower head and the Bell fit which works best for rounder noggins. We suspect the Plasma is closer to a Giro approach. Our model rode snuggly on our head with full comfort. There’s a 6cm range of adjustment on the dial.

One thing that’s noticeable right away is the one Ergo Fit pro pad inside. We appreciated the one piece design (there is a small pad on the back, too.) That makes washing and not losing pieces a lot easier. The pad has a dual density design — low density open cell for sucking up perspiration and high density next to the shell for maxed comfort. That’s an industry first but in all honesty, it’s an incremental plus that’s hard for us to “feel.” However, other people may find that a significant and plush difference. 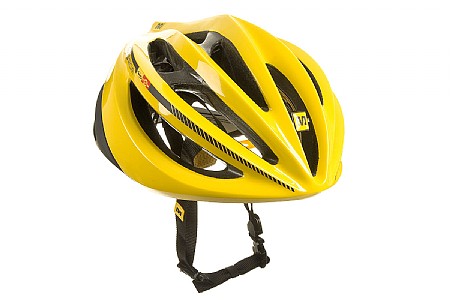 The extra strength of the carbon reinforcement meant that Mavic designers could increase the size of the vents and sculpt out and taper the channels for greater air flow. The Plasma isn’t the vent king but certainly, you’ll be happy with ventilation. Hey, the French are always cool, on and off the race bike.

Mavic has created a consistent design language, whether that is a wheel-set, bib short, pedal or helmet. The Plasma benefits from that styling: the black and yellow Mavic logo is nicely integrated on the back tail fin and on the two straps. The yellow also carries over on the inside with the Ergo fit padding. Our one disappointment was the Mavic logo floating in the middle of the front vent. Tacky and a bad contrast with the arc of the vent lines. F0rtunately, a box knife will remove that without any noticeable complications.

The Plasma SLR is a solid debut into the helmet market by Mavic. Sure, it’s not the lightest, coolest lid on the road — but it’s well-made, good looking and fits with comfort and style. It’s no wonder the French word for hat is also used as a compliment: chapeau.