No yapping. I am The Man!

Hola amigos y compadres or something like that. The Chihuahua has left the start house and the chicken is in charge.

Michael Rasmussen (Tecos Trek) won the opening 4.2 kilometer time trial around the Palacio de Gobierno and down along the Cerro Coronel. Nicknamed the “chicken,” Rasmussen did the arriba-arriba thing on his Trek and clocked the fastest time.

According to the Spanish race coverage, the great Dane was “muy fuerte”– very strong. Daniel Moreno (Caisee d’Epargne) raced in a mere 26 hundreds of a second back and Oscar ‘baby face” Seville (Rock Racing) was semi-fuerte in third just one second behind Moreno. This is loosely based on a careful application of the Twisted Spoke decoder device. Rasmussen donned the coveted crazy loud lime green leaders jersey.

“I’m happy for myself, but mostly for the team,” Rasmussen said. “I feel young, and hope to remain active and reach the level I was at before.” Yes, the Danish rider has a unique program, using the Chihuahua to build for the Tour de France. Rasmussen has no contract with the Mexican Tecos squad, Instead they have an oral agreement that he’ll be paid cash and a dozen fish tacos if he wins the overall. 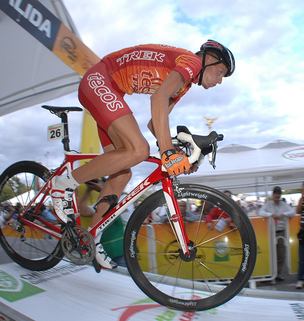 Apparently, Rasmussen left the team hotel, forgetting his Mexican wrestling mask. The Luchadores, as the wrestlers are called, are divided into two categories, the Rudos or bad guys and the tecnicos, the good guys. Having served a two year ban, the Dane is definitely in the rudo category. Besides being colorful, the masks are highly aerodynamic and would have saved Rasmussen a handful of seconds.

These are the kinds of careless mistakes that riders make when they’ve been forced to take a very long UCI-mandated siesta. The chicken will be ready tomorrow for stage one. It’s a chihuahua eat chihuahua world.