Behold, Alberto Contador, two and one half time winner of the Tour de France and human spud.

Who, who, who wants to make the big call on the Spaniard’s guilt or innocence and incur the withering glare, recriminations, laughter, outrage and any other number of possible reactions?

The latest chapter in meat-gate hit several comedy notes as the Spanish Federation, nominally in charge of issuing a verdict on the biggest star in cycling, begged for help from the UCI and WADA.

“The UCI and WADA took weeks to make the decision that we would be the ones to rule on the Contador case, so we thought they should help us make the ruling,” an anonymous source “close to the federation” told the Spanish newspaper El Pais. Hot, hot, hot potato. Throw it back to that blowhard McQuaid.

But the president of the UCI doesn’t want that scalding hot spud in his hands, either. “The system is that the Spanish federation must come to a solution. Some say the UCI should cover this instead of the national federations but who’s going to pay for it? We already spend too much… or better, we spend a huge amount of money on the anti-doping department. Most national federations judge on these matters seriously and as a result the UCI doesn’t have to appeal in many cases,” said our man McQuaid. 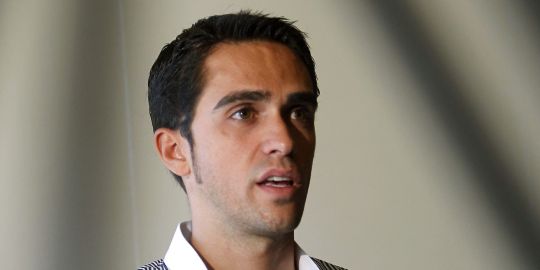 Contador. A potato in hot water.

There you go. It’s your potato, Spain. McQuaid is thinking, “hey, you screwed me for years on that jerk Valverde’s case, now I’m going to screw you. Have fun with your favorite son and his steak fabrication.” He already called the Spanish lax and lazy — now he’s tacking on scared and cheap.

Over in Spain, they just don’t have the will or the courage to pull the trigger on El Pistolero all alone. Witness the follow-up quote from Madrid: “If, after studying the documents submitted by Contador’s defense, the UCI and WADA decide that he must be punished, then he will be punished. If they decide otherwise, then not,” the source continued. In other words, please UCI, you do the dirty work. We’ll send you tapas and sangria but don’t put us in the critical spotlight by ourselves.

The truth is, nobody wants to be the one responsible for suspending or absolving Alberto Contador. Not McQuaid, not the Spanish Federation, not the Court for Arbitration in Sport. It’s an ugly situation, pressures are enormous, ramifications are massive and the aftermath long, stupid and frustrating for everyone involved. It’s the definition of lose-lose. And guess what, they still have doper Ezequiel Mosquera on deck — shit mist everywhere.

The attempt by the Spanish Federation to spread responsibility for the decision was an obvious cry for help. And as previously noted, the UCI is not happy with those boys and is in no mood to throw life jackets. Doped chickens come home to roost.

Still we have ourselves some exciting new lingo and marketing possibilities. The Saxo Potato! Sack of Saxo. Contador mashes on the pedals, Alberto peels off his race number, Contador deep fries Schleck. The Mr. Potato Head toy is an obvious and huge opportunity. Enough with the pistols, bring on the earthy brown tubers.

There’s no question that things are coming to a boil in Spain. Who wants the damn potato?