Half-pedal to the new paradigm. Everyone on the electric bikes now!

Home/Humor/Half-pedal to the new paradigm. Everyone on the electric bikes now!

Half-pedal to the new paradigm. Everyone on the electric bikes now!

Maybe you missed the final warning signs: the world ended. Not in that silly, disaster movie scenario with the virus, asteroid, sexy menacing space alien, nuclear holocaust, Instant Ice Age or Worlds’ Biggest Tsunami! That’s not the way it went down. Not with a big bang but with a bankruptcy. Dull and final with no special effects other than mass hysteria.

The U.S. economy is dead, the jobs out-sourced to China and India, your career evaporating before your eyes, the coffee shops packed with freelancers down to their last latte. Monster.com will not save you; there are five thousand resumes ahead of yours.

Everything costs more, the social graces are gone, the happy pills aren’t making a dent. The house is for sale but the banks won’t issue loans. We’re dead in the water, we’ve downsized everything and the garage sale proceeds aren’t enough to pay half the cell bill. It’s the Titanic, we’re going down and the only consolation is that Leonardo Dicaprio isn’t on board.

We’re cored out, exhausted, over-stimed, depressed and the box wine is empty. We’re the last of the stragglers, Beckett’s bums picking the last scrap off the carcass of capitalism, unwilling to admit life was permanently revised without your prior consultation.

On the flip side, what a rockin’ good time? We’re back to Pioneer days, homesteading the new dream and we’re not stuck with the wooden buggy. No, we’ve got spine-tingling new weapons and one of them is the Grace electric motorbike designed by German bike scientist Karl-Heinz Nicolai. The other is Boulder Colorado’s own Optibike, a fearsome and cool electric monster that will go anywhere. We are getting off the grid in style and momentum is key. 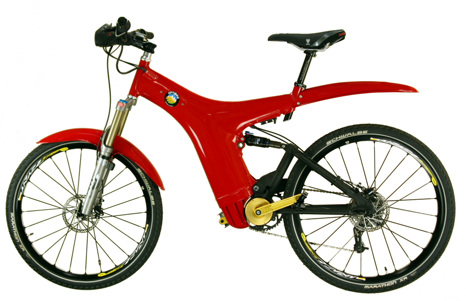 The Opti-bike. Our new life on wheels.

Remember fun? That thing we had before the crash? It’s back, seven days a week in HD. We’re off in the boonies on the Grace machine, zooming around at 40-mph. We’re Lewis & Clark on electric juice. We will be time-rich again and our days will revolve around two wheeled machines. We will ride the mountain bike, the road bike, rebuild the vintage Motobecane and learn the inner most mechanical workings of our new Grace or Optibike toy. We’ll be in the best shape of our lives, riding every day and recovering strong, refreshed with a pot of killer Aleta Wondo Ethiopian coffee.

We’ve got itunes, a solar generator, Sundance films beamed from satellite, a composter, a rain catch system. We have three chickens –that’s three eggs a day on demand, folks. We’re designing a greenhouse, dusting off the Stratocaster, and spending nights around our designer fire pit. Our personal chunk of Burning Man.

Bonus: the wife bough these sassy motorcycle boots to match the peasant skirt. She’s never looked hotter. The sex drive buried at the bottom of the deep freezer is thawing fast. We’re the mountain man, she’s the winsome filly, the bed frame will squeak tonight in the yurt that Dwell magazine wants to put on the January cover. Later, we’ll curl up reading Joe Parkin’s book on bike racing in the 80’s in Belgium while she mends a tear in the old Kelme jersey. Yeah, it’s a fantasy.

But we digress, hell, we never even got started before the self-derailment began. No matter — in the new life clarity returns, focus and desire and muscle tone and the aforementioned fun. The Grace and Opti-bike are the centerpieces of the new life, post asteroid-virus-tsunami. Irony of beautiful ironies: the big crash allowed us to finally ride bikes more. We will tame this new life and re-define ourselves as organic farmers, eco-designers, writers, artists and every other useful and creative freak bio we can come up with.

Victims still caught in the old paradigm will envy our powerful thighs and new skill sets. They’ll marvel at the pot of farmer’s stew, the functioning garden, the hides we tanned in our spare time, our stylish mix of retro and newtro technology — the flute we whittled, our solar powered oven. We may even let them watch us slaughter the pig we raised to make our own pancetta. We’ll give them autographed copies of our new book that we printed ourselves with an old Russian printing press we have in the barn.

There’s just two little hitches. But do the two kids and college really matter with the Opti-bike dangling in front of us, glittering like a see-thru bag of diamonds? With the brave new dawn fast approaching and those two wheels delivering us to paradise 2.0? Me thinks not.