Kevin. The last hope of Paris-Nice?

Can a Wisconsin engineer save Paris-Nice? Stage three of the now desparate Race To The Sun, was shortened due to snow on the roads.

Organizers cut the first two category three climbs but added a snowball fight at the finish in Aurillac. Paris-Nice also decided to award a jersey for “Best Snow Angel.”

However, all this could have been avoided if they’d contacted Trek Bicycle engineer Kevin Blake about his pedal-powered snow plow. Inspired by an episode of Monster Garage, Blake took an old rider lawnmower frame and in four months turned out a working prototype. 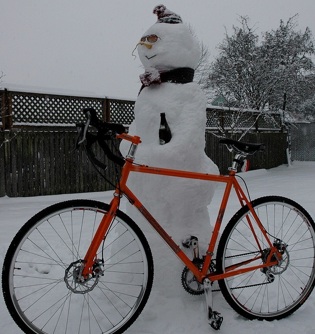 That was 6 years ago and now the plow is fully dialed in. If Blake’s machine can handle the snow-packed roads in Wisconsin, a mountain pass in France should be tres facile.

There’s no time to fly in Blake and his pedal plow to clear the road for Thursday’s category 1 climb to Mende. A cancellation may be the only sensible answer.

But there’s still a chance Blake could remove the snow on the Col de Vence, a monster climb that’s 9.7 km long with grades up to 6.6 %. Blake may be the last hope, really.

Otherwise, Twisted Spoke fears a repeat of today’s wintery action: Jens Voigt turned into a snowman. His entire Saxo Bank team was forced to free the snow-encased rider and chase back to the lead group to save his yellow jersey.

Ask Jens and he’ll tell you that was quite a snowball fight. Blake, you have your passport in order, buddy?