Speculation continues to run rampant: Is socialite and human toy poodle Paris Hilton training to ride Paris-Roubaix or not? The buzz is deafening.

Is the Hollywood starlet and heiress really planning to test herself in the Hell of the North? Celebrities do crazy things all the time — drive cars off cliffs, have sex with animals, host a reality show … but Paris Hilton at Paris-Roubaix?

The story gained traction when Hilton was caught buying a brand new cruiser bike. Then the rumors began — a call to George Hincapie for training tips, a red eye flight to the Boulder Performance lab for baseline lactate threshold and — take this on face value — a formal letter to the organizers of Paris Roubaix asking for a one time exemption and the right to join the hard men in the toughest one day race on the ProTour.

Just this week, Paris Hilton was again spotted, this time in the gym building strength and power for the greatest athletic challenge of her life. Paris dreams of cobblestones and apparently nothing will prevent her from living the fantasy.

You think this isn’t happening? Just some junior pr person’s wacky idea of drumming up more press? Then you better sit down on a hard chair, take a stiff drink and face facts.

Component manufacturer RaceFace is already building her a customized pink drive train for her race bike. They just unveiled the Paris For Paris crank set. This thing is happening.

Current US Champion George Hincapie, twice on the podium at Paris-Roubaix, isn’t ready to discount her chances. “She can ride the cobbles. She has a firm touch on the bars. And her muscles are supple. She reminds me a little of  Museeuw. She’ll do okay,” said Hincapie.

Also on board the Paris Hilton express is shoe company Bonte, which has fashioned a pink set of lightweight cycling shoes. The 100% carbon monocoque construction and pink color is a big hit with Hilton. 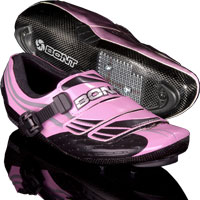 But all cycling and fashion accessories aside, the fundamental question remains unchanged: what are Hilton’s athletic capabilities? Does she have the strength, drive, power-to-weight ratio, VO2 max and unshakable courage to pull off this brutal test of endurance?

The logical answer is no. This is a plastic person used to a life of shopping and vapid self-promotion. It would be easy to characterize her as soft, superficial and misguided — hardly the qualities of a Paris Roubaix champion — or even a finisher.

But Paris Hilton defies the simplistic categorization. Consider the counter-point. She’s already at race weight, slim and youthful, with toned, athletic legs. And with millions behind her, she usually gets what she wants.

Anyone who survives in Hollywood, the Hell of the South, is obviously strong-willed and ambitious. Successfully arriving in the velodrome in Roubaix would create a media firestorm unlike any other and catapult Hilton into a new stratosphere. It’s a risk and a challenge she clearly relishes.

Twisted Spoke is staying on top of this narrative because it may just be the defining race story of 2010. Paris goes to Paris Roubaix. Wowsa!